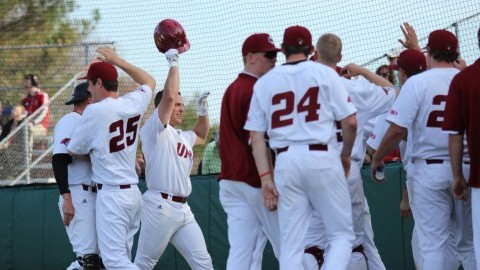 It wasn’t exactly the weekend that the Massachusetts baseball team wanted in Tampa, Florida, but it wasn’t all bad, either. UMass (1-5) bested Army 6-2 in the series finale on Sunday earning its first victory of the season after dropping both ends of the doubleheader Saturday.

“It’s a lot better than the other alternative (being swept),” Minutemen coach Mike Stone said following Sunday’s victory. “We put together a pretty good game. We got great performances on the mound today and we were able to score some runs and get out of some jams when we were in them.”

UMass broke a scoreless tie in the third inning by plating four runs in the top half of the frame, highlighted by a Vinny Scifo RBI triple to left center.

Pitcher Justin Lasko kept the lead intact, tossing six innings allowing nine hits and two runs. The freshman right hander did not allow a walk and struck out three in his second start of the season – rebounding from his two-inning, seven-run performance last time out against Charleston Southern.

“He really was competitive,” Stone said. “He made some great pitches. He executed some real key pitches in certain counts with people in scoring position. As opposed to just throwing, he pitched better and he competed more on the mound today.”

Scifo had two hits on the afternoon with two runs batted in along with a run scored. Jon Avallone (two hits), Dylan Morris (two hits), John Jennings and Hunter Carey each tallied RBI’s for the Minutemen, with the four run third inning being the difference.

“It kind of set the tone for the rest of the game offensively,” Stone said. “We had other opportunities that we didn’t execute well enough. We took advantage of a miscue on there part and gave ourselves a comfortable cushion going into the last couple of innings.”

The Black Knights (5-9) scored a single run in the third and another in the sixth off Stu Schley’s solo home run. UMass tacked on single runs in the seventh and eighth innings to extend its lead to 6-2. Senior lefty Evan Mackintosh came on in relief of Lasko, pitching three scoreless innings and allowing just one hit to earn the save. Brett Evangelista and Mike Hart each tallied a hit for UMass.

“It ended up being a pretty good day for us, even though I think we can play better,” Stone said. “Hopefully that will come as play more games and get more at bats and more innings.”

Trailing 5-3 heading to the bottom half of the sixth inning on Saturday, Army plated three runs on a fielding error which turned out to be the difference as UMass lost the first half of the double header, 6-5 in seven innings. Ryan Moloney dropped his second consecutive start, allowing two of the six runs scored on six hits in six innings of work for the Minutemen, dropping his season earned run average to 2.08.

Jennings had a pair of hits and RBI’s – leads UMass with five – with Hunter Carey, Ryan Lever and Matt Hosman combining for six of the Minutemen’s 12 hits.

The night cap was not as close, with the UMass falling 10-3. Jennings had two of the three RBI’s for the Minutemen, with Morris lacing two of the six hits. Starter Tim Cassidy lasted just 4.1 innings and allowed five earned runs on six hits in that span.

UMass returns to action Tuesday as they begin a two game series with Harvard (2-5) in Clearwater, Florida.