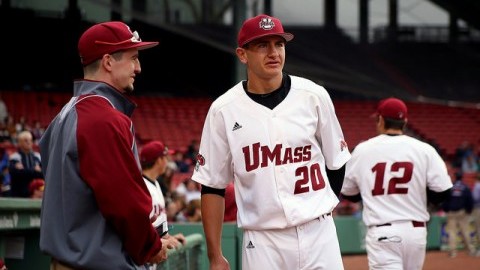 The Massachusetts baseball team had its lead-off hitter Brett Evangelista up with the bases loaded with two outs and a 3-0 count, down 9-8 in the top of the sixth inning of its game with Charleston Southern.

The opportunity to tie the game and maybe more was on the table. All they needed was another ball or for Evangelista to hit the ball where the Buccaneers weren’t to put them in position to take advantage of this opportunity.

Evangelista could not come through in that spot, and neither could the rest of the team late in the game as UMass (0-3) went on to lose 12-8 to CSU Sunday afternoon.

With the loss, the Minutemen were swept by the Buccaneers in their three-game weekend series.

“We had a lot of opportunities and a lot of guys in scoring position, but we just didn’t cash in,” he said. “It was a much better performance than yesterday’s games though and we will build on that.”

In the last five innings of the game, UMass was only able to muster one hit, compared to the first four innings when the team exploded for 13 hits and eight runs.

The Minutemen had four players with multi-hit games Sunday, led by designated hitter Mike Hart and leftfielder Dylan Morris, who both had three hits in the contest.

“There’s an adjustment period to playing again and I feel like we adjusted pretty well offensively today,” Stone said. “We put on a lot of really good swings and had some success early coming from behind. From that standpoint that was a positive for us today.”

CSU compiled 17 hits of its own and had six players with multi-hit games. It was led by third baseman Nate Blanchard who had four hits and outfielder Chris Singleton who had three hits and three runs batted in.

Despite the effectiveness of the Buccaneers offense, UMass did get a strong outing from reliever Ryan Venditti, who pitched 4.2 innings in relief of starter Justin Lasko, who had given up seven runs in two innings of work. Venditti held CSU to five hits in his time on the mound.

Stone was impressed with Venditti’s ability to come in and provide a steady hand on the hill.

“(Ryan) did a really good job of coming out of the bullpen when we needed some innings without giving up any runs,” Stone said. “They’re a good hitting ballclub and we struggled pretty much throughout the game to have clean innings, but Ryan did a good job coming in for us.”

After a rainout postponed the start of their season Friday, the Minutemen saw their first action of the new season in a double header on Saturday.

UMass dropped both games of the doubleheader by a score of 3-1 and 7-2, respectively.

In the first game, the Minutemen were held to one hit by CSU pitcher Evan Raynor. The lone hit came from John Jennings, who had a double in the top of the second inning.

Raynor was in control all day long going seven innings and striking out eight batters in the game.

UMass junior pitcher Ryan Moloney was determined to not be outdone on the mound, going seven innings and striking out seven on one earned run in his season debut.

The Minutemen were able to muster seven hits, but were no match for CSU pitcher Daniel Johnson, who went eight innings and struck out four.

UMass will be back in action next Saturday when it begins a three-game weekend series with Army West Point in Tampa, Florida. The first game will start at 4 p.m.