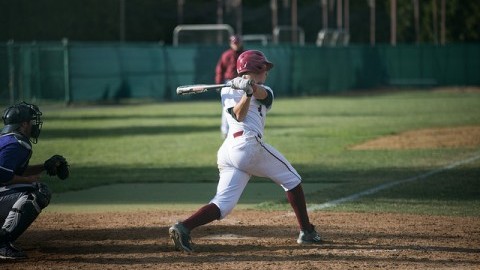 After getting off to a hot start offensively against Holy Cross Tuesday, the Massachusetts baseball team couldn’t keep the bats going and ended up surrendering an early lead in a 6-3 loss.

When the third inning ended, the situation looked great for the Minutemen (3-8). Catcher John Jennings drove in Mike Hart from first base by crushing a double into the left-center field gap. In the previous inning, left fielder Brett Evangelista drove in two runs on a two-out single with the bases loaded.

UMass’ offense seemed to have Holy Cross pitcher Zach Fox all figured out, building a 3-1 lead on four hits, two walks, a hit-by-pitch and three runs batted in, but then the Minutemen lost momentum in the fifth inning.

Once the Crusaders scored three runs in the top half of the inning to regain a 4-3 lead, the UMass offense really started to struggle. After reaching base safely nine times in the first four innings, the Minutemen couldn’t get on base through eight straight at-bats. Center fielder Dylan Morris eventually broke the streak with a single in the seventh inning, but they only managed to reach base one more time throughout the rest of the contest.

“We were able to put the ball in play early in the game but we weren’t as consistent as we should have been,” UMass designated hitter Hunter Carey said, going 2-4 in the game. “We don’t do as well when we’re hitting in spurts like that, but it’s good to see the bats going a little bit for some part of the game. We just got to work on being a lot more consistent.”

The Minutemen struggled to consistently put the ball in play toward the second half of the matchup. Of the 13 strikeouts the team collected, eight came after Holy Cross took back its lead in the fifth inning. The five strikeouts in the first four innings didn’t seem to bother them too much, but it’s difficult to score runs late in games when hitters don’t make contact.

UMass coach Mike Stone brought this up when discussing what he thought of the offensive performance.

“We were having some good at-bats and we made some things happen and got up 3-1,” Stone said. “Then things changed offensively and we left a lot of at-bats out there. We did a poor job with two strikes and struck out 13 times. (If you) strike out 13 times, (there’s) probably a pretty good chance you’re not going to create much offense about halfway through (the game).”

Carey credited the Crusaders for playing four different pitchers against UMass, forcing it to make in-game adjustments for each hurler, as UMass failed to advance a runner past second base once Fox left the mound.

Stone agrees that the multiple different looks certainly played a part in the offensive struggles, but didn’t think the results from his team represented any significant talent from Holy Cross’ pitching staff.

“I thought they shouldn’t have struck us out 13 times,” Stone said. “I thought (Fox) was very hittable. They improved as they got deeper into the game with their velocity and their command. We didn’t make an adjustment.”

“It’s (disappointing),” he continued. “When you’re in control of the game, it’s a positive. When it gets away from you, it’s not. I feel we should have won this ballgame if we had just finished the way that we started.”