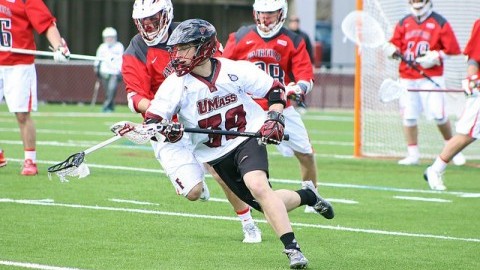 The Massachusetts men’s lacrosse team will not have much time to dwell on Saturday’s 10-9 defeat to No. 12 Harvard, as the Minutemen are set to take on Hartford Tuesday at Garber Field.

UMass (1-2) coach Greg Cannella said it’s all on the players to use the quick turnaround to their advantage and get themselves ready to play, both physically and mentally.

“They have a lot to do with it in terms of their preparation for the game,” he said. “Mentally it’s probably tougher on UMass and Hartford than it is physically. These guys are 18 to 23 years old, so recovery time’s got to be quick for that age.”

On the mental challenge, Cannella added: “You kind of learn your opponent a little bit, both teams will cram a few things in and then come out and play in the game. You can’t change a lot, so you gotta go out there and play the game.”

Coming off a 16-11 loss to Bryant this past weekend, the Hawks (1-1) have scored 27 goals in their first two games of the season and are averaging 36 shots a game.

Cannella is aware of the style Hartford plays offensively, and knows it will be tough to limit its chances.

“They push transition, and are very athletic, particularly in the midfield,” he said. They have a potent attack, with (Jaedon) Henderson and this young kid (Dylan) Jinks, a freshman, is really doing a good job. They’re lethal so you can’t jump up field, you’ve got to make smart plays and limit unforced turnovers in the middle of the field or else they’ll cram it down your throat.”

Sophomore Griffin Feiner and Jinks lead the way offensively for the Hawks, who have each recorded eight points. Henderson is right behind them with seven, while sophomore Will Dulin, another name Cannella mentioned, has six.

While Hartford produces offensively at a high rate, it also gives its opponent the chance to find the back of the cage. The Hawks have allowed 40.5 shots per game, and have given up 26 goals to their opposition.

If the Minutemen, averaging 10 goals a game, wish to generate chances, Cannella knows it will come down to the pace of play.

“Times we played fast Saturday and times we did not and I think if we’re going to be a productive group we have to play fast all the time,” he said.

It has been balanced scoring for UMass thus far, with sophomores Buddy Carr and Peter Lindley leading the Minutemen with eight and seven points respectively. Carr leads the team with seven goals and Lindley is right behind him with five. Juniors Gianni Bianchin and Grant Consoletti follow, each with five points.

In net, the time will continue to be split between junior D.J. Smith and sophomore Dan Dolan, who have both played in all three contests. So far, Smith has started in the cage for the Minutemen, playing the first half before being replaced by Dolan. The sophomore had made 19 saves, compared to 14 made by Smith.

Through three games, UMass has committed 15 penalties, with Hartford being penalized 11 times.

For the Minutemen, the magic number for penalties in a game is four.

“You want to keep penalties down to about four or in that range,” Cannella said. “I think we did that (Saturday), or at least had five but we’d like to keep it to four.

Opening faceoff is scheduled for 3 p.m. at Garber Field.