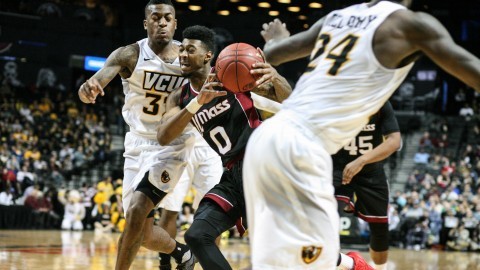 NEW YORK – The colors yellow and black filled the stands for the matchup between the Massachusetts men’s basketball team and Virginia Commonwealth Friday night as “V-C-U” and “let’s go Rams” chants drowned out the small UMass crowd in attendance.

After every Rams steal, block or converted and-1, the crowd roared and came to its feet like it was any other home game at Siegel Center.

But the difference in Friday’s Atlantic 10 tournament matchup was that it was played at a neutral site at Barclays Center in Brooklyn – roughly a five and a half hour drive away from the Richmond, Virginia campus.

“VCU played a great game today. They obviously won the game on the backboards with – 20 offensive rebounds that turned into many points,” Minutemen coach Derek Kellogg said. “I thought that was the difference in the game.”

“We had mostly our fans out there so we got a lot of energy and you always want to come out and put on a show,” Rams sophomore guard Justin Tillman added about the atmosphere.

A fast pace was set early on in Friday’s game as both teams raced up and down the court in an up-tempo environment that suits both sides’ preferred style of play. But despite the racing start, neither team shot well from the floor to open up the game.

“You know, the first four points of the second half bothered me some because I felt like we needed to come out and make a little bit of a push, and they scored the first four, so I called a quick timeout. They had a nice little burst there where we hurt ourselves some with our offense at times,” Kellogg said.

“They’re a good team. They were committed to playing their style and I thought they did a great job on the boards. It was a combination of some different things.”

UMass went 1-of-5 from the field and committed four turnovers during the stretch, as the deficit ballooned out of reach.

“They have an advantage because a lot of their players, they focus on rebounding,” Minutemen freshman center Rashaan Holloway said. “They have players that usually just – all they want to do is rebound. We had obviously had trouble with keeping them off the glass today. It was just tough for us, tough with the offensive rebounding.”

“We saw Rhode Island get a bunch of offensive rebounds (against the Minutemen Thursday), so we knew we could do the same thing,” Alie-Cox added.

Senior guard Trey Davis led UMass with 20 points in his final collegiate game while fellow senior Jabarie Hinds added 16. Holloway also finished with 16, with 14 coming in his 19 minutes of action in the second half.

For Holloway, Friday’s game marked his fourth double-digit performance in the Minutemen’s last five outings. He said he hopes to use his strong finish to the season to motivate him entering his second year.

“I realize with the trust in my teammates that they gave you and what they were teaching me, like with what Trey was teaching me, I can’t be lackadaisical. Nothing is going to just come to me,” Holloway said. “It taught me to work hard, just be patient. My time will come.”

Davis finished the 2015-16 season as UMass’ leading scorer, averaging 18.6 points per game. He’s one of five seniors set to graduate.