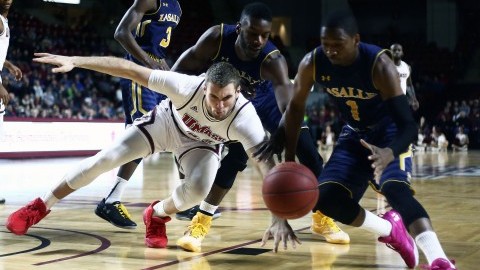 The first took place on the court at Mullins Center, in the Minutemen’s 69-52 victory over last-place La Salle on Senior Day. The second, coming about 10 minutes after the final buzzer, was courtesy of St. Bonaventure’s win over Saint Louis, which handed UMass a first round bye in the Atlantic 10 tournament.

“I’m happy for our seniors and the fans that came out tonight. I thought our guys played a good game, one that we just wanted to get a win and try to secure a 10 seed if possible,” Minutemen coach Derek Kellogg said. “We go to Brooklyn with a little momentum in our minds and if we can play well, I think we can make some moves.”

UMass (13-17, 6-12 A-10) swept its two-game season series against the Explorers (8-21, 4-14 A-10) behind a trio of double-digit point performances from its three leading scorers Trey Davis, Donte Clark and Jabarie Hinds.

Davis finished with a game-high 27 points and 12 rebounds behind a 20-point first half before Hinds carried the brunt of the scoring in the second half with 12 of his 13 points over the final 20 minutes. Clark added 17 in the victory.

“When we’ve won and played well I think those guys (Davis and Hinds) have kind of gone back and forth,” Kellogg said. “Then you throw Donte in the mix who had 17 and that’s a pretty good three-man group that can score the basketball.”

In a tight first half filled with nine lead changes and five ties, the Minutemen finally started taking control over the final two minutes, 14 seconds of the half, in which UMass closed out on a 7-0 run to take a 30-25 lead into the locker room.

UMass was carried by Davis’ 20 points (6-of-11 shooting), including three 3-pointers, over the first 20 minutes. The rest of the Minutemen combined to shoot 4-of-17.

UMass then opened the second half on a 14-5 run over the first seven minutes to open its lead and the Minutemen never trailed from that point on, leading by as much as 20 points with 3:46 remaining.

For La Salle, guard Cleon Roberts led the way with 14 points as Jordan Price and Yevgen Sakhniuk followed with 13 points apiece. Price, who came in averaging 23 points in four games in his career against UMass, was limited to 4-of-18 shooting.

“Just (had to) pressure the ball when he had it and just contest every shot he tries to put up,” Hinds said on defending Price. “Just try to make everything uncomfortable for him and that’s what we did.”

The Minutemen came into Saturday’s matchup sitting at the No. 11 seed, meaning they would have had to play in the A-10 tournament’s first round as one of the conference’s bottom-four teams.

However, with the win and the Billikens’ loss, UMass slots into the No. 10 seed where it will face No. 7 seed Rhode Island for the third time this season in Thursday’s second round.

According to Davis, picking up a first round bye was crucial for the Minutemen.

“Not playing Wednesday, that’s big for us,” Davis said. “It gives us an extra day to rest and get things done that we need to get done. I’m glad we got the win today.”

Kellogg added that not only does the bye provide an extra day of rest, but it allows UMass to avoid a rematch with No. 14 seed La Salle, who he said can be dangerous in a playoff setting.

“When you see what La Salle has been able to do against some of the top teams in the league, they’re very dangerous and they’re making shots,” Kellogg said. “With us playing Thursday and Saturday, with kind of a quick turnaround, you never know but maybe that extra day on Sunday gives you a chance to get a little more rest and be a little more focused for Thursday.”

The Minutemen only last faced the Rams last Thursday in a 68-50 loss where UMass only managed 12 points in the first half. The Minutemen won the first matchup Feb. 2 in Amherst.

Thursday’s second round game will tip off at 6:30 p.m. and will be televised on NBC Sports Network. The A-10 tournament is hosted by Barclays Center in Brooklyn.