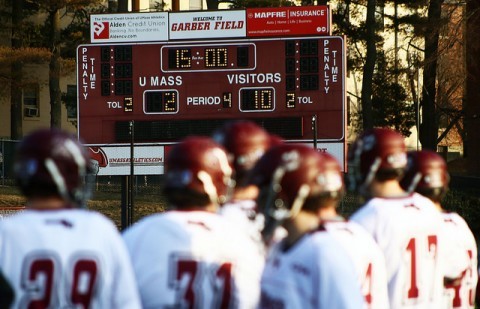 Massachusetts men’s lacrosse coach Greg Cannella was a man of few words after Tuesday’s game against No. 15 Albany.

Those three words summed up the afternoon for the Minutemen (2-4) who fell to the Great Danes 16-4 at Garber Field. Heading into the locker room following the first half, UMass found itself already down 8-0 with nothing to show for its 18 shots.

Hegarty contributed one of UMass’ four goals in the contest.

The growing deficit had the Minutemen playing at a faster pace than what they prefer, resulting in many blocked shots and few decent looks at the goal.

Albany (3-1) goalkeeper Blaze Riorden stopped the majority of the Minutemen’s scoring chances, finishing the game with 15 saves.
“We knew they had a great goalie, the goalie is excellent. But as soon as he makes a couple of saves we get gun-shy, we are not shooting as much,” UMass senior defender Bob Fahey said.

Unlike the Minutemen, the Great Danes’ offense was at the top of its game. In the second quarter UMass allowed six goals on 12 shots and Albany was 8-of-16 on shots in the first half.

The Great Danes shot close to 50 percent of their shots Tuesday afternoon, ending the game converting on 16-of-40.

“They did a good job of spreading us out,” Fahey said. “Getting the wide areas, getting a fast start. They are fast, they are an athletic group, they’re crafty and they kind of played their game and they took it to us.”

Despite feeling good heading into the game, Fahey said that team just didn’t show up against Albany.

“We hung in there for a little while, kind of got away from our game plan and the next thing you know it is 8-0 at halftime,” Fahey said. “Defensively we liked our matchups. We had a good scout on what they were doing. Offensively we knew what they were going to do.”

The only signs of life that the Minutemen showed were two quick goals to start the second half. Right off the opening face-off of the third quarter, Noah Rak passed it to Hegarty, who snuck UMass’ first ball past Riorden for his fourth goal of the season.

Two minutes later, sophomore Peter Lindley scored his ninth goal of the season on a last effort shot right in front of the cage.

The two goals cut Albany’s lead down to six, but that was as close as the Minutemen would get to a comeback Tuesday.

UMass tied the Great Danes with 40 shots apiece, led in ground balls (30-27), won 15-of-23 faceoffs and had fewer turnovers than Albany (12-11) but still struggled to keep pace on offense.

Cannella said it wasn’t a matter of not having enough possession time.

“I thought that we had pretty solid possessions we just didn’t score, they scored,” Cannella said. “If we lost 15-23 faceoffs I would agree with you but I thought we had more possessions than we have had in the past few games.”

What it came down to was taking advantage of the opportunities they had, according to Cannella.  UMass scored two goals in the final four minutes of the fourth quarter when Albany had already substituted its goalie, but the Minutemen only converted two of their 38 shots before Riorden’s departure.

According to Hegarty, UMass’ energy level was not where it should have been against Albany.

“I thought the energy was there early but could definitely be more consistent throughout the game,” Hegarty said

The road does not get any easier for the Minutemen as they host No. 10 North Carolina next Saturday.