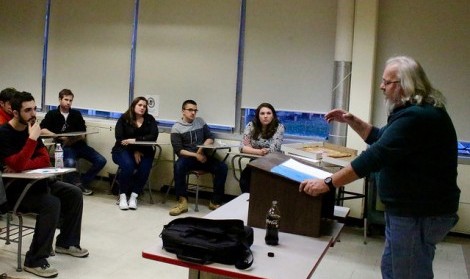 Students filled room W-11 of Machmer Hall for Ferraro’s hour-long informal chat, which covered the origins of the conflicts in Syria and the rise of the Islamic State.

Ferraro, who is an expert in post-Cold War international relations, said that few people understand what is really going on in Syria and Iraq. He outlined five major current wars in Syria including the Syrian Civil War, the war against terrorism and the battle over access to natural gas in the Middle East. Ferraro joked that because the conflict in Syria has many underlying causes, the students might not leave the discussion with any more clarity about the situation.

Ferraro also spent time discussing the Islamic State’s current condition. He explained that the Islamic State seeks to establish a caliphate for radical Islamists, but he believes that as long as it supports terrorism outside of its borders, it has no path to becoming a legitimate nation-state. Other countries will always respond in the face of terrorism because inaction would be “suicide,” Ferraro said.

He added that the United States’ efforts to cut off the Islamic State’s oil supplies have successfully diminished its wealth. Previously, the Islamic State could offer fighters a salary of 400 euros per week. Money has since become far less available.

Students asked questions throughout the event, ranging from the role of climate change in the Syria conflict to the threat that Islamophobia poses in the United States.

Ferraro referred to climate change as the underlying source of the Arab Spring and its subsequent conflicts. Global warming also necessitates the mass movement of people and is a major cause of political instability. Currently, the Middle East is experiencing its longest drought in 900 years, he said.

“We’ll keep seeing people moving all across the planet, and the hostility that this engenders is only going to get worse,” Ferraro said.

One student asked about the seriousness of Islamophobia in the United States and Europe. Ferraro answered that historically, racist and xenophobic sentiments grow whenever people feel insecure.

“But of course we have hope,” he said. “My God, you can all say something (about racism and xenophobia).”

Ferraro concluded that he is encouraged by the younger generations and the new “global civic culture” that encourages the exchange of ideas around the world. The Internet and study abroad help young students form connections and understand the world around them, Ferraro added.

“My advice to your generation is to learn how to disagree well. There are going to be differences among people and problems to be solved, but they need not lead to violence.”