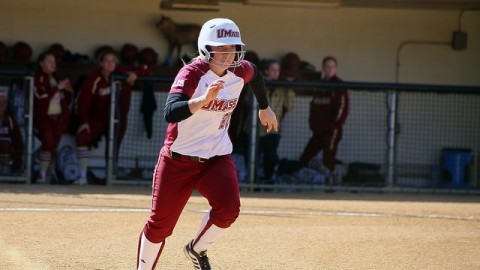 Coming into this season, the Massachusetts softball team seemed primed and ready to start Atlantic-10 conference play. With one weekend under its belt, taking one out of three games against Fordham, UMass is poised with high expectations and ready to take the next step forward.

The one win for the Minutewomen (7-18, 1-2 A-10) came in the first game of the doubleheader Saturday. It was UMass’ first win against the Rams in four years.

“That was the first time we beat them since Taylor (Carbone) first came to the program,” coach Kristi Stefanoni said.

This past weekend did not produce the results the Minutewomen had hoped for, but players and coaches alike said the results were not an accurate representation about what UMass softball is about.

“Results didn’t show who we are, what UMass softball is,” Taylor Carbone said. “We showed good fight though.”

With conference play upon them, the Minutewomen had a rough go of it in their preseason tournaments going 6-16 in that time. However, with games against some top-tier teams like Penn State, Ole Miss, Minnesota and Maryland, UMass hopes those games prepared itself for conference play.

The Minutewomen’s difficult schedule, however, will pour over into A-10 play with games against George Mason, Saint Joseph’s and Rhode Island in the coming weeks.

Last season, UMass finished in eighth place in the A-10, missing the conference tournament as only the top six teams participate. This year however, Carbone made it clear that making the A-10’s was the Minutewomen’s biggest goal.

What do they need to do to in order to get there? According to Stefanoni, it’s pretty simple: defense and power.

“We also need to hit for power, we’re starting that today. We’re going to work on it in practice today. We have to keep feeding them the Wheaties!” Stefanoni added.

With Carbone as the leader of the Minutewomen, her senior season has been dedicated to winning the A-10 championship. While the ending is coming for Carbone, she was honest when asked about her thoughts on the final ride.

“It’s bittersweet, I’m excited, but I haven’t really thought about it being over,” Carbone said.

UMass has its A-10 home-opener this weekend when the Patriots (13-10, 2-1 A-10) travel to Sortino Field. George Mason won two of three games against the Rams last weekend.

Saturday will be a doubleheader with the first game starting at 12 p.m., and the backend starting at 2 p.m. The two teams will play the final game of the series on Sunday at noon.