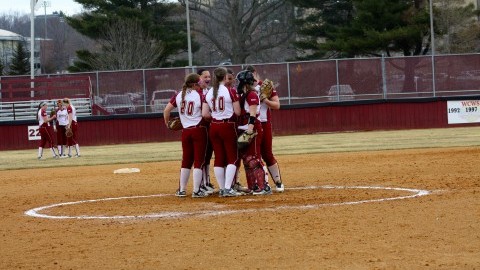 After a weekend where the Massachusetts softball team took two of five in the Red and Blue Classic, UMass (5-13) made a trip down to Boca Raton, Florida, and came away with just one win in its second to last tournament of the preseason at the Florida Atlantic University Parents’ Weekend Classic.

Sunday was perhaps the worst day of the weekend, as the Minutewomen were shut out by both Rutgers (9-14) and Mercer (12-16) – in five innings – in a doubleheader on the final day of the tournament. As a team, UMass mustered only eight hits against the Scarlet Knights and four against Bears.

Sophomore pitcher Meg Colleran got the start in the circle for UMass against Mercer, pitching all four innings allowing eight runs – three earned – on 10 hits against the Bears. The Minutewomen committed five errors against Mercer.

“Our defense had been spot on so far coming into this weekend, only committing 0-1 errors per game, but we doubled that this weekend,” Stefanoni said.

Entering the seventh inning with the game tied at 1, LIU Brooklyn (9-16) scrapped together fours runs to secure a 5-1 victory on Saturday.

Colleran once again went the distance for UMass, however allowed six of her nine hits during the top of seventh in the losing effort.

The Minutewomen tallied only five hits as a team, with a pair of those coming from third baseman Whitney Cooper, who had their only RBI after singling home Shea Newsome in the bottom of the with.

Taylor Carbone, Melissa Garcia and Ashton Wince each recorded hits for UMass, while as a team it committed three errors during the game.

No. 19/17 Minnesota (16-7) handed the Minutewomen their worst of the tournament in the second game of the Friday doubleheader, a 12-0 win for the Golden Gophers.

Minnesota struck for six runs in the top of the seconding inning as starter Taylor Carbone lasted just 2.1 innings allowing 10 earned runs on nine hits. Tata Klee came in for relief in the second, allowing two earned runs as the game ended in five innings.

UMass’ only hit of the game came in the third inning on a Wince single up the middle.

The only win of the tournament for UMass came in the opening game Friday, as the Minutewomen topped Robert Morris 2-0.

UMass got on the scoreboard early in the first inning after Taylor Carbone hit a RBI sacrifice fly that scored Jena Cozza. The Minutewomen’s second run didn’t come until the top of the seventh inning when Kaitlyn Stavinoha singled to left field scoring Erin Stacevicz.

Colleran pitched the complete-game shutout, allowing just four hits while striking out three. With the victory, she now has a team-leading four wins in the circle for UMass.

However, despite the rough weekend, Stefanoni praised the play of Taylor Carbone, Stacevicz and Wince as the trio started in all five games.

“I’m hoping [they] will be a spark plug to help the team do their job,” Stefanoni said. “Right now we’re missing out on our RBI potential.”

Minutewomen look ahead to Maryland Invitational

Next weekend is the final weekend of pre-season tournaments for the Minutewomen as  they take on Ball State, Maryland, Binghamton, North Dakota State and Boston University in the weekend tournament.

Stefanoni said one the keys to getting everyone back on track for UMass was to focus on what it can control and note worry about outside criticism.

The Minutewomen’s final tournament of the season kicks off Friday at noon against the Cardinals.