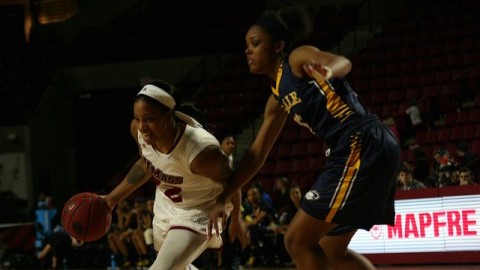 When the Massachusetts women’s basketball team finished its final game on Thursday – a 73-62 overtime loss to Fordham in the second round of the Atlantic 10 Championship Tournament – it capped off a season that can be best described as one with many streaks and runs.

From the very start of their 2015-16 campaign, the Minutewomen (12-18, 6-12 A-10) lost four straight games after winning their season opener against Holy Cross. That stretch sparked a rollercoaster of a year, as UMass then answered a few games later with a three-game winning streak to get to a .500 record entering conference play.

The team then went on another run and lost 11 straight games before ending the regular season with a five-game winning stretch. A postseason win brought the streak to six-games, with the loss to the Rams snapping it all up.

“(The season) was full of ups and downs,” said senior forward Rashida Timbilla, who established herself early in the year as the emotional leader of the team. “I think we got off to a good start out of conference. In conference, (we) probably hit a little bit of a wall by losing 11 straight, but we were able to turn it around and win six straight before our season ended. So, there were a lot of ups and downs, but it felt good to end it on a high note.”

At the start of the year, the Minutewomen faced high expectations coming off of a 2014-15 season that tripled its win total (12) from the year before. The young group retained starters in Cierra Dillard (second-leading scorer), Timbilla (top rebounder) and Leah McDerment, while also keeping promising youngsters Maggie Mulligan, Kymber Hill and Alyx Stiff. Throw in highly-regarded newcomers like Alyssa Lawrence and Bria Stallworth, and this team figured to improve even more to make a run at the A-10 Championship.

But that’s not how things transpired.

While Dillard thrived offensively to lead UMass in scoring (15.5 points per game) and Stallworth played exceptional enough to earn A-10 All-Rookie Team honors at the end of the season, former coach Sharon Dawley’s group finished in 11th place in the conference. While Timbilla collected enough rebounds to reach 1,020 in her career and stands as one of two women to reach 1,000 in the program, the Minutewomen posted a losing record for the ninth-straight season. Hill, Mulligan and Lawrence all made noticeable strides toward establishing themselves as a formidable front court on offense and defense, but still couldn’t provide enough in the paint to propel the team toward contention.

That’s why UMass athletic director Ryan Bamford decided to relieve Dawley of her coaching duties Sunday after a six-year tenure, despite the program’s rapid improvement over the past two seasons.

Despite her firing, however, Dawley and her staff still coached the players toward positive feats this season. The defense ranked third in the conference in steals with 7.6 per game. Timbilla ranked second in rebounding with 9.6 per game. Stallworth led all A-10 rookies in points with a 13.2 average and ranked seventh in the overall conference with 3.8 assists per game. The future looks bright, as all but two players are returning next year.

“It was a tough season in terms of a lot of ups and downs,” Dawley said Friday. “But to the credit of our girls, they stuck together and continued to get better and were able to turn things around to win our last six. Last night, obviously we were very sad that the season had ended, but my top emotion was being proud of them for the turnaround they were able to make.”

Per release, a national search for Dawley’s replacement is underway.

“We thank Sharon for her solid efforts on behalf of UMass women’s basketball,” Bamford said in a press release. “We believe that our women’s basketball program has the necessary resources to compete for Atlantic 10 Championships and national postseason play. Our expectation of building a championship-caliber program presents an exciting opportunity for our department and our next head coach.”