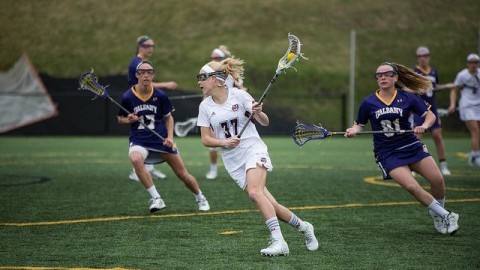 The Massachusetts women’s lacrosse team didn’t forget about its lone regular season loss last year against Albany. Instead, the Minutewomen used it as motivation and got revenge in a 13-7 victory over the Great Danes Wednesday afternoon at Garber Field.

“We were very hungry. Albany’s a great team, but this year we’re very good,” Minutewomen junior Hannah Murphy said. “We don’t lose on our home turf and we wanted to defend that. We were hungry and wanted to get them back and show that last year was a little fluke and show them who we are.”

Wednesday’s game was a physical affair as both teams were aggressive on the defensive end. There were 49 total penalties called – 28 by Albany (3-10) and 21 by UMass (7-1).

But the Minutewomen took control of the game behind balanced contributions on the offensive end, with three players recording hat tricks and seven scoring at least one goal. UMass coach Angela McMahon saw this balance as a way to create rhythm offensively.

“I thought we did a great job,” she said. “The more people involved, the harder it is to stop us defensively.”

Murphy, who along with Erika Eipp and Hannah Burnett scored three goals, agreed that UMass has become dangerous offensively with a plethora of scoring threats.

“A lot of girls are stepping up this year. We have so much depth, it’s really dynamic,” Murphy said. “Anyone who goes in is ready to go and that’s what’s making us a better team this year – how dynamic we are and how many people can score.”

The Minutewomen started Wednesday’s game scoring the first five goals, with three the coming in the opening 10 minutes of the first half. The goals came from Hannah Burnett (two), Eileen McDonald, Holly Turner and Eipp appeared to give UMass a commanding lead.

But Albany’s Rachel Bowles, who was named to this year’s midseason Tewaaraton watch list, answered with two straight goals of her own to cut into the deficit. Bowles attracted defenders all game, with Amber Tobin drawing the task of marking her.

After Bowles’ goals, each side traded scores and UMass went into halftime with an 8-5 lead.

The Minutewomen once again came out firing to start the second half, outshooting the Great Danes 10-4, grabbing seven more groundballs and winning six out of eight draw controls. They started the half with two goals in the first three minutes, including Murphy’s tally 12 seconds in.

“We put ourselves in the best position to get the ball,” McMahon said. “This speaks to our athleticism and speed that we were able to kind of wear them down by running a lot of players and being the first one to get to the ball.”

With 10 minutes left in the contest, it appeared Albany scored a goal that would have decreased UMass’ lead to three, but the refs called a penalty on the Great Danes, negating the goal and putting UMass in a man-up situation. Nicole Troost then scored an insurance goal on the first possession of the advantage, putting the Minutewomen up 12-7.

“It was huge,” McMahon said. “We trust our goalie in the cage on an 8-meter shot but to be able to draw that man-up situation, it was huge and I’m glad we were able to translate it into production on the other end.”

UMass’ next game will be next Friday when it travels to Philadelphia to take on Saint Joseph’s to kick off its start to Atlantic 10 play.