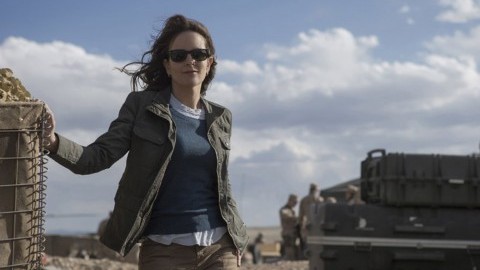 “Whiskey Tango Foxtrot” was a decent film for all moviegoers. It had a great blend of everything, even if the final product wasn’t the most remarkable.

Screenwriter Robert Carlock did an outstanding job with this script as the jokes were very well-timed and executed well by the cast. Nothing felt forced. Carlock really packed a punch in this movie, and it was very entertaining from start to finish. Carlock even managed to make a joke out of the title, as “Whiskey Tango Foxtrot” is military slang for WTF.

Tina Fey does a great job as Kim Barker, an American journalist who travels to Afghanistan to record footage and write articles during the height of the War on Terror in the early 2000s. Interestingly enough, her impression of Sarah Palin on “Saturday Night Live” made me picture the former Alaskan governor in this film, which I thought was great. Directors Glenn Ficcara and John Requa did a phenomenal job with their cast, as Tina Fey was the perfect choice for the lead role.

The film had everything moviegoers could want in a two-hour film: action, violence, sex, swears and crude humor. “Whiskey Tango Foxtrot” is a great bang-for-your-buck movie with no dull moments.

Another concept Carlock tackles is how the Afghan people handle Barker’s presence. Typically, Afghan men shame women of their own country, so one would think that Barker would have a difficult time adjusting to the standards in Afghan, but the men take her in surprising well. Carlock had a blast with this bit and the jokes that he wrote were hilarious.

With that said, while this movie was good all around, it didn’t wow me. I appreciated that it tackled a lot of concepts head on, and there were good moments, but it did have its fair share of flaws.

One thing that the movie failed to do was portray side characters to help Tina Fey in this film. We met a few other characters, but they seemed underdeveloped. We met another Western interloper Tanya (Margot Robbie), and Iain MacKelpie (Martin Freeman), an awkward British journalist who becomes Fey’s romantic interest.

“Whiskey Tango Foxtrot” was good, but missed out on being great. A lot of different concepts were certainly interesting and entertaining, but they mostly just skimmed the surface of what could have been better bits.