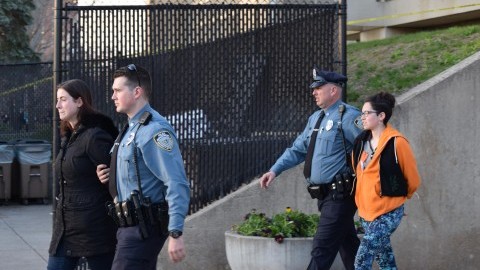 The students were arrested at Whitmore Administration Building Wednesday night following the third day-long sit-in protest by the University of Massachusetts Fossil Fuel Divestment Campaign against the University’s investments in the fossil fuel industry. Combined with the 15 UMass students arrested Tuesday, 34 total arrests have been made since the start of the protest Monday.

At 6:09 p.m. Wednesday, Divest UMass spokesperson Filipe Carvalho announced that the UMass Police Department had given protesters the first warning to disperse as they remained in the building after business hours.

The protesters wishing to avoid arrest exited the building and proceeded to chant by the southwest side of Whitmore, the Massachusetts Daily Collegian reported Thursday. Protesters began to disperse after the last group of six students were arrested at around 7:30 p.m.

The 19 students who were arraigned Thursday filed into the courtroom at around 9:45 a.m., filling the entire left side of the courtroom. During the arraignment, they were called forward in groups of three or four. All opted to represent themselves, echoing their answers in unison, and were offered the same deal as the original 15.

Although the majority of the students were from UMass, including all 15 of Tuesday’s arrestees, three of Wednesday’s arrestees were from the Five Colleges. Of the 19 arrested Wednesday, Shira Breen and Sophie Strauss-Jenkins are students of Smith College, and Natalie Strohm attends Hampshire College.

Christine Dasco, a UMass student who was arrested Tuesday, was also in court as she had to leave the courthouse before entering a plea Wednesday. She accepted the same deal, and was reminded that the maximum penalty for violating the conditions of her probation is incarceration for up to 30 days.

Dasco and other arrestees are expected to perform several of their community service hours during a clean-up event at Look Memorial Park in Northampton on Earth Day, April 21.