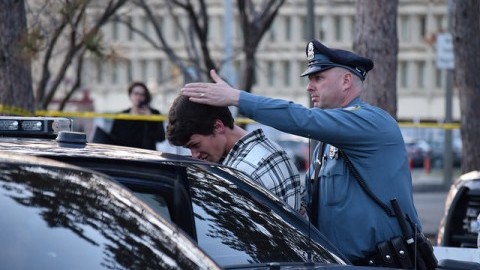 University of Massachusetts police arrested 19 more students for trespassing after the Whitmore Administration Building had closed for business Wednesday night.

According to an email from University spokesperson Ed Blaguszewski, “When buildings are closed for business and are no longer staffed, standard protocols require that members of the public depart to ensure public safety and the protection of property within the building.”

The UMass Fossil Fuel Divestment Campaign held its third sit-in at Whitmore Wednesday. Students have demanded a complete divestment of the UMass endowment from the top 200 publicly traded fossil fuel companies since 2013.

In December 2015, the UMass Foundation, which controls the UMass endowment, announced it was pulling direct investments from coal. According to Student Trustee Emily O’Neil, the investments were worth about $400,000.

On April 4 of this year, Divest UMass re-submitted their official ask to UMass system President Marty Meehan and Chairman of the Board of Trustees Victor Woolridge.

Following the first day of sit-ins Monday, the University released a press release reading, “UMass system leaders today said they would advocate for a policy that would see the five-campus UMass system divest and prohibit direct investment in fossil fuel companies. Victor Woolridge, chairman of the University of Massachusetts Board of Trustees, and UMass President Marty Meehan said the step they were recommending represented ‘a logical next step’ on the action the University took last year when UMass divested its direct investments in coal companies.”

President Meehan and Chairman Woolridge called their commitment to advocating for divestment both a proposal and a pledge in the release.

Divest UMass’ request included a UMass commitment to make a plan for divestment no later than June 1.

“We don’t want UMass officials to make a pledge,” Divest UMass spokesperson Filipe Carvalho said. “We want them to divest.”

According to Carvalho, at one point there were at least 203 students participating in the sit-in Wednesday.

By 4:30 p.m., protesters including students, faculty and staff had filled the third floor outside of the chancellor’s office. In fact, some professors took their classes to get trained as sit-in protesters.

Carvalho explained that protesters participating in the sit-in had all received Nonviolent Direct Action (NVDA) training. Trained students were marked with an “x” on their hand and brought into Whitmore via a Divest “Whitmore escort.”

Every half hour by the Whitmore ramp, NVDA training sessions were held by Divest officials. According to Carvalho, 20 students had volunteered to be arrested and were given additional training.

O’Neil said she was “not entirely sure why students chose to stay” after the building closed Tuesday, adding that she was unsure and could not comment on the group’s specific strategy, and said she thought that the Board of Trustees presented a “fairly decent deal.”

O’Neil spent Wednesday attending the Board of Trustees meeting in Dartmouth. She said that the Divest UMass campaign had “cast a shadow” on the meeting.

“Everyone was definitely aware,” she said during an interview with the Daily Collegian before the arrests Wednesday.

However, she did say that she understands the protesters’ frustrations.

“There needs to be more commitment publicly to back divestment any way they can,” O’Neil said. “I don’t think it’s unreasonable to get a public commitment from these public leaders.”

When asked about the value of UMass investments in fossil fuels, O’Neil said that the information is not readily available and that there is a lack of transparency surrounding the UMass Foundation in general. This sentiment was echoed by Carvalho.

The UMass Foundation is “not super accountable to students,” O’Neil said. “They do whatever they decide to do.”

The Socially Responsible Investing Advisory Committee, a “relevant” UMass body that the University said would review plans for divestment in its press release, has not met in a year according to O’Neil.

“I don’t see the administration of the University system (changing) anything … given the very slow progression from the last three years,” she said.

At 6:09 p.m., Carvalho announced that UMPD had given protesters the first warning to disperse. Shortly afterwards, the protesters wishing to avoid arrest walked down the Whitmore ramp and proceeded to where police were stationed and began chanting by the southwest side of Whitmore.

About halfway through the rally, a coordinator of UMass Divest announced that Dr. Jill Stein, a presidential candidate and member of the Green Party, had tweeted in support of the UMass Divest movement.

Protestors began to disperse after the last group of six students were arrested around 7:30 p.m.

Divest UMass organizers announced to the crowd that the sit-in occupation of Whitmore would resume 8:30 a.m. Thursday.

Following the protest, Carvalho said “We’re proud of the action tonight. We showed them that we have power and we will be back.”

He added that Divest UMass “absolutely” has enough funds to bail out the 19 arrestees Wednesday night.

O’Neil said she hoped UMass would understand that the protesters were students expressing their beliefs and “not a reason for the University to take action against them.”