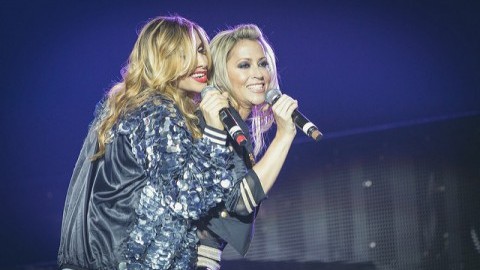 All Saints have reunited once again with their new album, “Red Flag.” After nearly a decade since the release of their third studio album, “Studio 1,” the spunky English-Canadian girl group proclaim their immortality through the energetic and brash track, “One Strike.”
“One Strike,” the debut single of the album, carries a punch. It begins with a smooth synthesizer overtone. The song begins to build as a steady percussive rhythm, and a single open voice layered over one another. The song begins to feel hollow and open as all four women break into the chorus.
The women’s harmonic chants over a groovy bass line create a powerful chorus. The lyrics create a bitter, wrathful, sassy tone that is empowering to anyone listening to it. It’s a ballad about burning bridges to dust, a swift blow that ends a relationship. It’s simple, yet its honesty produces a compelling anthem. “One Strike” sets the listener up for an album full of angry diss tracks directed at past lovers, but as the time goes on more emotions unravel.
From what started as invincibility moves to vulnerability with the following track, “One Woman Man.” The women chant desperately for their lover to give them a chance and reciprocate the feelings they’ve had. They recognize their vulnerability, they recognize the man’s lies and commitment issues, but still proclaim their loyalty.

“One Woman Man” still clenches onto the bitterness of “One Strike,” yet this time it does the opposite. Instead of leaving the relationship, these women are trying to string together whatever pieces they can find to keep it alive. It creates a narrative all too familiar: knowing something is toxic but hoping it can be changed.
This theme continues through the rest of the album. “Make You Love Me” and “Summer Rain” each recognize the women trying to rekindle the love left behind, stating their importance for this man’s livelihood. As the album keeps moving to “This is a War” and “Who Hurt Who,” the women are recognizing how hard it is to keep this man interested.
The album is a constant conflict between giving up on love and holding onto its last few strings. It resembles the story of a classic breakup, but these singers put their own twist on it. Each track carries their own style that samples from a number of genres. At first it may seem like the tracks lack cohesion, but All Saints keep it together through the narrative they’ve created.
“Red Flag” has its flaws. The girl group is never able to keep the momentum that began with “One Strike.” While each song can hold itself up on its own, not a single track on the album parallels the energy found in the debut single.
There are moments where the women are honest, but at times it seems as if they are attempting to stay modern after a long hiatus. “Ratchet Behavior” feels contrived. Its tone doesn’t fit well with the rest of the album and the song feels cluttered underneath experimental bass notes combined with a few reggae influences.
“Red Flag” is filled with impactful metaphors and images that create very powerful pieces of work yet sometimes they fall flat and can leave the song feeling awkward. Despite these instances, “Red Flag” is a successful pop album.
This success is apparent through the genuineness and solidarity these four women hold together. What makes “Red Flag” even more impressive is the background. It’s hard enough to see female rock groups succeed in the industry, but for this group to release another album after ten years and two breakups is almost unheard of. All Saints find a way to crash through the mold.
All Saints is a group that has been around for decades, and “Red Flag” is a testament to their longevity and talent and to the maturity they have developed. The group isn’t wasting time trying to write music for sales, they create music to heal over heartbreak.

“Red Flag” is a refreshing pop album that carries uncommon styles and voices. It doesn’t hide behind gimmicks, it remains moving while at the same time reflective of past and present.