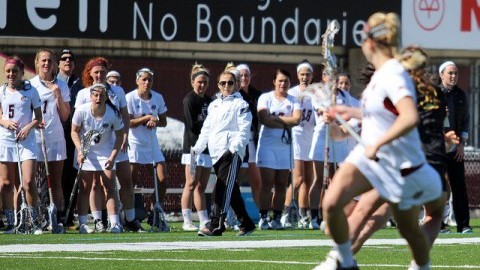 Massachusetts women’s lacrosse coach Angela McMahon is off to an incredible and historic start in her short tenure at UMass.

Just 10 games into only her sixth season with the Minutewomen, McMahon recorded her 100th win as a head coach, as well as tying a national record with 38 consecutive conference wins, after a 15-9 win over Duquesne Sunday afternoon.

The 38-game win streak in the Atlantic 10 for UMass started in the first A-10 game McMahon coached, and has continued throughout her time as a head coach for the Minutewomen.

“Every year we have a different team, so the challenge is more how to get them to work together and be cohesive than comparing ourselves to other teams within the conference,” McMahon said.

This focus on the process rather than wins and losses has bode well for the Minutewomen in the win-loss column, as UMass’ win total has not dipped below 17 under McMahon since she began coaching in 2011.

“It’s really just focusing in on what we need to do to perform well, not really thinking big picture, but just trying to play to our full potential for 60 minutes and we usually come out on top when we do,” McMahon said.

How the streak started

McMahon served under former head coach Alexis Venechanos as an assistant at UMass, before leaving prior to the 2008 season to coach at the University of Connecticut. Her prior experience with the program helped her seamlessly transition when she returned to the helm in 2011.

“I already knew the blue collar identity and culture of the team,” McMahon said. “A lot of the players who were already here I had actually helped with recruiting them before I left.”

She wasted little time establishing a winning culture in her first three seasons posting a combined 54-8 record, which is the best record for any coach in their first three years in NCAA history.

McMahon credits the players and coaches she has had the pleasure of working with in the past five seasons with the success they have achieved in such a short amount of time.

“We’ve had some real blue chip players come through, but we’ve also had players who started out not getting a whole lot of playing time but had great work ethics and they just stuck with it and were able to step up and fill after those players graduate,” McMahon said.

McMahon has benefited from a few historically great seasons and sustained performances from players starting with the senior class of 2011, her first year, that has included players etched in the record book including Haley Smith, Kate Ferris, Sam Rush, and continued up to just last year when the class of 2015 graduated goalkeeper Rachel Vallarelli who ranks 11th all-time in NCAA for career GAA (6.77).

“When you graduate great players, and we’ve had some exceptional players, you don’t know what you’re going to have the next year after, and to see these kids come up and take on roles that are left behind, it’s a pleasure to see,” McMahon said.

This season for the Minutewomen has been no different from years past as they continue the culture of winning with a 9-1 start (2-0 A-10). McMahon has also done little to deviate from what has made her team successful throughout her time at UMass.

Her focus rests squarely on developing her team, and little else. In fact, her getting the 100th win and having another possible record in front of her has done little to faze her and the Minutewomen.

“I know the record exists but it’s not something that’s talked about or something that’s thought about,” McMahon said. “This year especially we’ve been focusing much more on self-improvement, and having challenging practices and more one-on-one sessions to make sure we keep getting better.”

While the Minutewomen may not be paying much attention to it, UMass will need just one more victory to break the record set by the Northwestern Wildcats, McMahon’s alma mater, in the American Lacrosse Conference from 2005-2011.

The Minutewomen face George Mason (7-2, 2-0 A-10) on the road in Fairfax, Virginia Friday for a spot in the record books.