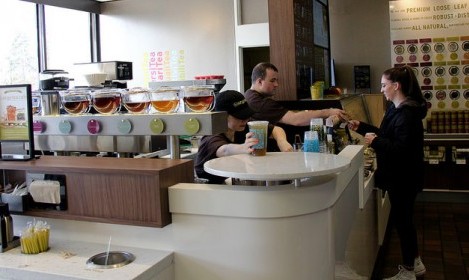 While the University of Massachusetts may offer a wide variety of cafés, restaurants and dining options on campus, Argo Tea offers a new, unique atmosphere.

Aside from the Starbucks in Hampshire Dining Commons, there hadn’t been many options in Southwest Residential Area for students to sit down in a relaxing environment, do homework or order their favorite coffee or tea – until last week.

The grand opening of the new all-natural café Argo Tea, located next to Pita Pit in Hampden Building, was held on April 4. Argo Tea focuses on the health benefits of tea-based drinks, using natural cane sugar as a sweetener instead of high fructose corn syrup, in addition to offering gluten free and vegan options. Nancy Cho, northeast regional leader for Argo Tea, is helping with the opening at UMass and said tea can be “a healthy alternative” to other caffeinated drinks like coffee and soda.

Upon first walking into the café, there is a table with free samples of signature drinks, as many customers are new to Argo Tea. Cho understands that the menu can be “slightly overwhelming” for people who are not avid tea drinkers, and said the samples can help them decide.

There is an entire wall of different teas for customers to choose from and a brewista will prepare it on the spot. Argo Tea offers many signature drinks such as hibiscus tea sangria, with pieces of real fruit in it, and seasonal specials like green tea strawberry créme. The café also makes “teappuccinos,” with premixed tea, natural sweetener and mixture of milk, sparkling water or sometimes lemonade.

There are lattes and coffee available for coffee-lovers, but Cho said a healthy alternative is the Matcha Vanilla Latte, made with Japanese green tea that has more caffeine than a typical cup of tea.

Argo Tea also carries a variety of sandwiches and snacks like fresh baked pastries and fruit parfaits. According to employee Josh Perilli, the company receives shipments of frozen croissants, macaroons and bread products from France, which are then baked and served fresh. The menu is designed to give customers plenty of healthy options; the all-natural flavor syrups are made in-house and it offers soy, almond and coconut milk instead of dairy for no extra cost.

The first Argo Tea opened in Chicago in 2003, and it has since expanded mainly to college campuses and airports in the northeast region as well as locations in the Middle East in Qatar and the United Arab Emirates. Current U.S. locations include those at New York University, Northeastern, Saint Louis, Grand Valley State University, University of North Carolina at Asheville and Buffalo State.

Cho has worked with Argo Tea since it opened, and thinks the company has “started its own trend” by showing people there is more to tea than just being “something you drink when you’re sick.”

Kaitrin Callahan, a senior communication major at UMass, had never been to an Argo Tea until the University’s grand opening, but after enjoying the hibiscus tea sangria, said she would “definitely drive (there)” from her off-campus housing. Sean McMullen, a hospitality and tourism management major, first tried Argo Tea when visiting New York City, and added that it provides a “calm, cool environment.”

McMullen said he’s happy that UMass now has a café with “a sit down atmosphere,” and he plans to come back for his new favorite tea, Carolina honey.

Michael Kacprzyk, assistant manager of retail dining at UMass, said Argo Tea has been busy since it first opened, and he has already hired about 30 new staff members.

Argo Tea accepts UMass Dining Dollars, YCMP swipes, UCard debit, cash or credit, and prices typically range from $3-5 for drinks, while food may cost more depending on what is ordered. The café is open Monday-Thursday from 7 a.m.-9 p.m. and Friday-Sunday 10 a.m.-9 p.m.

Emily Medrek can be reached at [email protected]