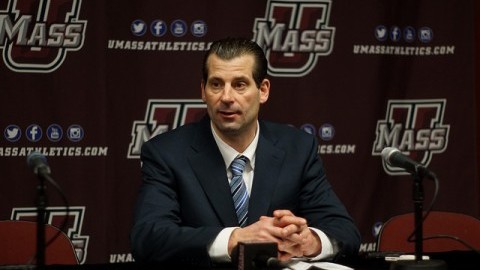 While all of the recent talk in the sports endorsement world has been centered around LeBron James signing a lifetime deal with Nike, which pays him more than $30 million annually for the rest of his life, another endorsement deal has largely gone under the radar.

That deal belongs to Massachusetts men’s basketball coach Derek Kellogg, who officially signed on with L’Oreal for a 30-year contract worth $10 million annually.

Kellogg expressed gratitude to the hair product company for its generous endorsement.

“This has been what I’ve been working toward for years.” Kellogg said. “Sure, our team didn’t have the best year on the court, but I sure do look damn good on the sidelines. Thank you to L’Oreal for this wonderful opportunity. My hair will not let you down.”

The contract, signed after UMass was knocked out of the Atlantic 10 tournament by Virginia Commonwealth earlier this month, is the largest sports endorsement deal for hair products in history, easily eclipsing former Pittsburgh Steeler Troy Polamalu’s agreement with Head & Shoulders and Green Bay Packer Clay Matthews’ deal with Suave.

Matthews expressed congratulations when reached for comment on the Kellogg endorsement.

“I’ve always thought I had the best hair in sports and then one day I was flipping through the channels and caught a glimpse of (Derek) and I was astounded,” Matthews said. “It’s pretty remarkable when the coach gets you more interested than his own team. His hair has that type of effect on people.”

As a part of the agreement, Kellogg will have shipments of L’Oreal products sent to his home every day for the next three decades.

“I go through at least five bottles of hair product per day, so this is a big weight off my shoulders,” Kellogg said. “Even with my salary, it is tough to pay for all that product. It can be hard to maintain, so this deal will definitely make my life a bit easier.”

Not everyone is a fan though. Kellogg’s wife Nicole Flory believes these hair products are taking over their home and making it hard for them to raise their son Maximus.

“Max is a growing boy, so he needs space to move around and have fun within our house,” Flory said. “I’ve always loved my husband’s hair. It’s one of the best features he has, but I think this is just too much.”

To quell his wife’s concerns, Kellogg has begun plans to construct a large storage space in his backyard to store the extra product he is sent each day. UMass athletic director Ryan Bamford has offered aid from the athletic department to complete this project.

As Kellogg prepares for the offseason, he outlined two main goals. The first is to get his team prepared for the 2016-17 season. The second is to make sure his hair stays as slick as ever.

“I live my life by F.H.B.,” said Kellogg, as he ran his fingers through his black, gelled-back hair. “Family. Hair. Basketball.”

Derek Zoolander can be reached at your nearest runway or at the Derek Zoolander Center For Kids Who Can’t Read Good And Who Wanna Learn To Do Other Stuff Good Too.