Board of Trustees hears from CERC, UMass Divest, RA/PM Unit in Wednesday’s meeting 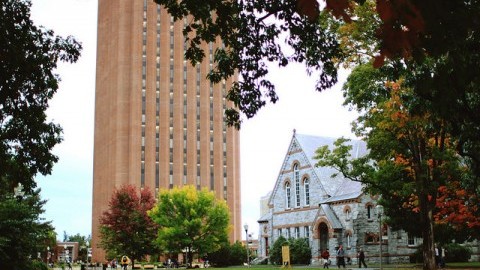 The University of Massachusetts Board of Trustees heard from members of the Coalition to End Rape Culture, the UMass Fossil Fuel Divestment Campaign and the Resident Assistant/Peer Mentor Unit of the United Auto Workers during its meeting on the Dartmouth campus Wednesday.

Topics discussed in the meeting include just cause for peer mentors and resident assistants, the implementation of a Survivor’s Bill of Rights across the UMass system and a plan for divestment from fossil fuels.

According to the meeting agenda, Max Montille, a student from the UMass Dartmouth chapter of the UMass Fossil Fuel Divestment Campaign, spoke to the board. Student Trustee Emily O’Neil said that Montille asked for “commitment to a plan by June that would spell out what divestment would look like over the next five years,” citing 2021 as the goal for complete divestment.

O’Neil said that Montille also read a statement in support of the student protestors participating in the sit-in in the Whitmore Administration Building.

However, O’Neil commented that the UMass Foundation has control of the divestment process, not the Board of Trustees, even though “obviously the president and chair of the board has a lot of sway with that group.”

Priya Ghosh and Olivia Murphy, president and vice president of CERC, respectively, as well as CERC member Adara North were present at the meeting. Murphy spoke about possibly implementing a Survivor’s Bill of Rights across the UMass system.

To make the idea feasible, Murphy requested the Board of Trustees compile a report “to kind of get a feel for how the whole system is doing in terms of supporting survivors.”

Murphy said that CERC drafted a document stating what the organization wanted the report to contain.

“We’re asking them to go through their written policies (and) procedures,” she said, including what they do when there is a complaint filed, a breakdown of all the resources for survivors of sexual assault on campus, what training is required for faculty and staff and data about campus crime.

“We kind of want this to be a comparison because we know that each of the five campuses are very different,” Murphy said, adding that she hoped the report would allow the board to consider a minimum standard and “give them an understanding of what areas need more work.”

Murphy requested that the report be completed by the Sept. 21 Board of Trustees meeting on the UMass Lowell campus. Chairman of the Board of Trustees Victor Woolridge was concerned about how realistic the deadline was, according to Murphy.

“This needs to be a priority, and if it takes longer than this date, that’s understandable, but we want to know that this is something that is being treated with an appropriate sense of urgency,” she said.

Ian Roche of the Resident Assistant/Peer Mentor Unit spoke about the need for just cause, according to O’Neil. The RA/PM contract ensuring just cause is currently in mediation, which O’Neil described as a long process.

“I hope that they can get a contract soon, because working without a contract is really risky,” she said.

More than a dozen members of the Graduate Employee Organization also attended “in support of the just cause right, in support of the Survivor’s Bill of Rights and divestment,” according to Anais Surkin, a union representative and organizer of UAW Local 2322.

Murphy commented that “after the meeting, almost all the groups were approached by members of the board to talk about ways to move forward” and that she “hope(s) that these three groups in particular have had some sort of resolution before the (next) meeting.”

The Board of Trustees will meet again on June 15 at the UMass Medical School in Worcester. According to Murphy, the meeting will be focused on deciding fees and tuition.