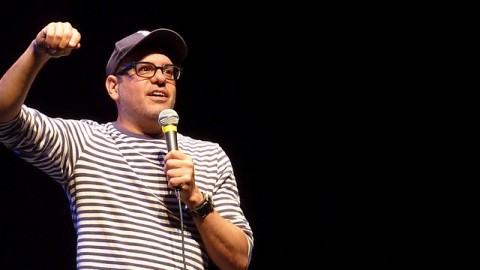 “Well, that one was an easy sell for Northampton,” Cross said following a booming reception to one of his many jokes aimed at the easy targets resting at the opposite end of the political spectrum.

Even when the comedian took indirect jabs at the audience – either by mocking the vaping industry or miming how snide hipsters would approach purchasing “fine-crafted, artisanal, organic” gasoline – he was adulted. Well, mostly.

About a third of the way through his set, a bit on gun law reform prodded an audience member to stand up and offer her own expletive-ridden opinion before storming out with both arms raised in the air, flipping Cross the double-bird.

After she made her exit, Cross smiled and said similar storm-outs have happened at all but one of his shows. Honestly, he was surprised it had happened so early in the evening, because his set “gets a lot, a lot worse.”

Cross drew from his multiple creative backgrounds to form his content. He acted out series of anecdotes and hypothetical situations, offered glib dismissals and well-paced bursts of criticism in character voices. He still arrived, however, at the same basic messages that’ve reappeared throughout his decades-long stand-up career: A lot of Americans (read as conservatives or whoever has a Southern accent – for Cross they’re synonymous) are violent and childish ignoramuses who worship backwards gun laws, oily politicians and manipulative messiahs.

That’s not to say many of his criticisms and comments aren’t rooted in truth or are ineffective in drawing the appropriate appalled laughs. But, after a six-year hiatus from the stand-up circuit, one hopes for more than a retooling of old ideologies for the present day.

Still, the technical precision of his set reinforced that Cross is a veteran. Only a man comfortable in his craft can use the phrase “so I was jerking off today” as an effective and recurring segue. He ended each section with a hypothetical, whose answer lay in the next segment. The overlapping content provided a seamless hour and half that, as a whole, could stand as the absurd and intelligent monologue of a playfully fatalistic man. The crowd seemed to act more as non-essential validators of his own wit and opinion.

He opened the set by describing a tattoo parlor whose slogan, “Home of the get what you get tattoo,” developed into a scenario where a customer receives a starkly different rendition of a tattoo commemorating his dead daughter. The result: A well-endowed demon sitting spread-eagle while flipping the bird and demanding, “Where the f****** pope be at?”

Next, followed another heart-warming, family-centered Thanksgiving moment. Cross, who is an atheist of Jewish heritage, said his family enjoys celebrating the “first day of a near genocide of an entire people.” He offered some advice: “Drop the casinos, and focus on getting more banks and media companies.” Cross also gained some wisdom of his own during the holiday: he found out his mother couldn’t take a punch.

He spent the remainder of the set attacking conservative values through the same vehicles of impersonation, ironic justification of mentalities he deemed idiotic and over-the-top depictions of the consequences caused by legislation he opposes.

He imitated a grieving witness of massacres like the Sandy Hook shooting and offered his own explanation for such tragedies: God needed to sacrifice innocent virgins for the stalk of priests waiting in heaven. The wave of groans from the audience did not stop Cross from acting out a hypothetical solution offered by the NRA to arm teachers.

The character Cross embodies goes mad with rage, forcing a student to suck on the end of a gun barrel for chewing gum. Before transitioning, he mimed the power mad teacher stroking her handgun whispering “Oh it’s so powerful, it’s so powerful.”

The other apex of his attack came when he embodied a republican congressman funded by the NRA who witnesses an armed protestor murder his daughter in protest. When offered the hypothetical of what he has to say now, Cross responds, “Well, a small price to pay for freedom.”

Underneath all of Cross’ exaggerated character bits, his contempt and vitriol are observations rooted in compassion as well as a revulsion at the callousness of some of the ideals that dominate the country. In other words, nothing new in David Cross’ America.

Brendan Deady can be reached at [email protected] and followed on Twitter @bdeady26.