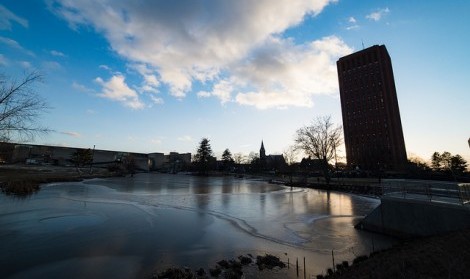 We’ve all heard someone describe Amherst as a bubble: isolated from the rest of the world, progressive and tolerant – idyllic. This comment is usually said in passing, perhaps as a joke, garnering a few nods and perhaps a “yeah, seriously” from the commentator’s audience. We accept this notion as fact, then simply move on with our day.

But take any sort of a less-than-shallow look into life in Amherst and you’ll find the opposite to be true. Last Sunday, hateful flyers attacking the LGBTQIA community were distributed across printers throughout the University of Massachusetts campus. Three days prior to that incident, a non-UMass affiliated organization gained access to University printers and distributed anti-Semitic and white supremacist flyers across campus.

Chancellor Kumble Subbaswamy was quick to condemn the act on behalf of the campus community as hateful, and encouraged the student body not to be complacent in striving for a society in which diversity and equity is sought.

These flyers came a month after a series of swastikas were found on our campus: one scratched in a metal bathroom door in Hasbrouck Laboratory building, one drawn in snow on a parked car and one carved into a bathroom wall in the Integrative Learning Center.

The day the swastika in the ILC was reported was the exact day that junior Jeremy Tibbetts published a piece in the Massachusetts Daily Collegian describing his experience with anti-Semitism on campus. His article was inspired by pictures of a “Nazis vs. Jews” beer pong game, which circulated on an unofficial UMass Snapchat story.

In his piece, Tibbetts mentions that, after more than a month of the pictures first appearing on the story, the University hadn’t issued an official response to these images. Instead, the University responded to individual complainants, telling them the people in the photographs had been identified and that the situation was “adjudicated under the Code of Student Conduct.”

This inability to publicly respond is representative of the way in which our University’s administration handles the issues of anti-Semitism, racism, cisheterosexism and other acts of hateful discrimination and marginalization on this campus. They are quick to condemn overt representations of white supremacy found here and to punish those responsible, but they do not do enough to educate UMass students about the more insidious and subtle displays of prejudice that occur on this campus.

For example, last spring, when a wall in the Central Residential Area commonly used for artistic expression had “Black Lives Matter” painted on it, it was almost immediately defaced, with the word “All” spray painted over the word “Black.”

The implication of the vandalism was obvious: the concerns of an underrepresented community at UMass were not important enough to have a mural. Moving forward, students at UMass must look at attempts to minimize these issues and to marginalize underrepresented groups just as seriously as we currently do toward the racism of a hate-filled flyer.

When UMass administrators held a listening session for students to express their concerns about social justice on campus in November, student speakers discussed racism at UMass not as a small collection of overt, bigoted acts of vandalism but as a current that runs through the University every day.

Students of color described being called racial slurs repeatedly over the course of a semester, and being profiled by police officers when working as on-campus residential movers. One graduate student said her advisor told her she only obtained her job because she is black. Speakers said they do not feel like students at a university where they see almost no one who looks like them or experiences their struggles.

Hate speech and expressions of white supremacy, like the flyers printed on Thursday and the “White Students Union” for UMass, which was created on Facebook, are acts of violence and security concerns for underrepresented groups at UMass. It will remain necessary for the University to condemn these actions, but it is just as critical for our administration to work on ending the racist, cisheterosexist and ableist microaggressions that make students feel out of place on our campus.

Our University will also have to commit to investing resources into outreach programs to recruit students of color. Such programs are necessary for underrepresented groups to feel safe in this community. If UMass has hundreds of thousands of dollars to spend on concerts to stop students from throwing parties during Blarney Blowout, it also needs to spend money to staff the Center for Counseling and Psychological Health and fund our strained cultural programs.

While the majority of the focus should shine on administration, the student body and the Daily Collegian also have a responsibility to address these issues. Our student leadership must prioritize issues of representation, social justice and on-campus racism. Just this month, our student body elected a president and vice president that couldn’t offer specific policy solutions to increase the retention and recruitment of students of color at this year’s debate.

It’s paramount we all work seriously and to the best of our ability to confront these problems.

It’s not enough to condemn these acts of hate, and to merely agree that racism needs to end. As a primarily white institution, we need to be more critical of our underlying prejudices and understand how privilege skews perception. We express our solidarity in the struggle against hate, but the moment our privilege is pointed out, we crawl back into the shadows, too uncomfortable to acknowledge privilege and talk about discrimination.

Our student body is, predominantly, apathetic. This apathetic deflection only further allows privileged individuals to remain indifferent to issues that do not directly affect them. We must combat apathy through action.

The Daily Collegian acknowledges it must make considerable strides in our coverage of these issues. We claim to represent the voices of all students on campus, yet the Collegian remains a predominantly white institution. We have yet to make an honest effort to reach out to cultural Registered Student Organizations and other student groups, and offer an outlet to communicate their perspectives.

As Stefanie Greco Larson writes, “Movements that are the ‘most threatening to the existing socioeconomic order’ either get no coverage at all or coverage that focuses on events rather than goals and issues.”

The Collegian is no stranger to this trend. We cover events across the Five Colleges but seldom discuss the issues warranting the events in the first place. We need to better utilize our pages to address these difficult but necessary conversations.

The administration, student body and Collegian can’t continue to ignore these issues. We need to talk about race, cisheterosexism and ableism, regardless of how uncomfortable it makes us. We need to talk about it because it makes us uncomfortable, because we don’t know how and because bigotry, even in the subtlest of forms, festers and grows into hatred.

Whatever bubble we think we live in, it’s high time we burst it.