‘Embrace of the Serpent’ a powerful exploration of cultural erasure 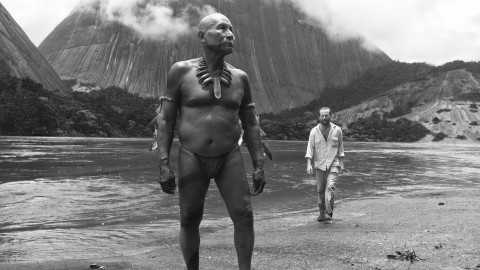 As a meditation on the toxic effects of European colonialism on native peoples of the Amazon – and the havoc it wrought upon the jungle’s flora and fauna – the film acts as a subversion of “Heart of Darkness.” It is not the allegedly innate evil of the forest that is the problem; it is the evil that we take with us and allow to fester.

The year is 1909, and the film opens in a bath of white light. We are introduced to the nauseous German explorer, Theo (Jan Bijvoet), along with his companion Manduca (Yauenkü Migue), a native freed man, as they row downstream. An inch away from death, Theo searches for the rare yakruna leaf that he believes will cure his illness.

Only one man can guide them toward the plant: Karamakate (Nilbio Torres), the last member of the Cohiuano tribe. Karamakate, wary of all whites because of the plagues they always seem to herald (i.e. genocide, deforestation and Christianity), distrusts Theo and his westernized aide.

A second plotline happens concurrently, where, over 30 years later, an American ethnobotanist named Evan (Brionne Davis), enlists the help of an aged Karamakate (Antonio Bolivar). This white man also searches for the yakruna and, with the bulk of his research based on Theo’s initial expedition, hopes to succeed where Theo failed. Evan knows Karamakate from a photograph in Theo’s notebook, which Karamakate refers to as his Chullachaqui, his hollow spirit.

Much of the tragedy that stems from “Embrace of the Serpent” is its lamentation on cultural erasure. As the last member of his tribe, when Karamakate dies, all of his people’s beliefs, rituals and customs die with him. The petroglyphs that he carved long ago used to signify great meaning and import, yet now, in his own words, “they are just pictures of rocks.”

Do not mistake “Embrace of the Serpent” for a “noble savage” narrative. The film acts as a reflection on the eradication of indigenous cultures at the hands of white invaders. Colombian director Ciro Guerra imbues his narrative with melancholy and anger, and packages those feelings through a trippy sense of dysphoria.

At the same time, we witness the folklore of the individual tribes of the Amazon, along with their elaborate spiritual belief systems that have long since been erased. At least nine different languages are spoken in this film, and the fact that half of them belong to people that no longer exist makes this dialogue feel all the more poignant.

Throughout their journeys, Karamakate emphasizes to Theo and Evan the importance of living in harmony with nature (only eat fish and meat when the rains come), and to disregard worldly possessions. After all, “they’re just things.” Across their surreal explorations, they witness the apex of Colombia’s rubber wars, brought upon by the white hegemony’s lust for possession.

When Karamakate, Theo and Manduca stumble upon a Catholic mission, they find a sanctuary full of native orphans overseen by a sadistic priest. If any of the children express any remnant of their culture, it is swiftly whipped and beaten out of them.

When Karamakate and Evans return decades later, the children have grown up and forged a violent cult with a Christ-like figurehead. With aspects of their Amazonian heritage mixed in with their Christian indoctrination, Karamakate notes that they have created a society that combines the worst of two worlds.

At the same time, the film has a nuanced portrayal of indigenous culture that does not refrain from criticism. Theo’s compass, a vital tool for his journey, is stolen by a chieftain because of its resemblance to an object famous in the tribe’s folklore. Cultural purity begets ignorance, yet forced cultural adoption only instill violence.

The film’s themes recall “Things Fall Apart,” where author Chinua Achebe castigated European imperialism for its ruination of the Igbo people, yet did not withhold his own criticism of their superstitious cultural practices.

Nevertheless, “Embrace of the Serpent” is a colonialist narrative told from the perspective of its victims, and Guerra accomplishes this feat through gorgeous filmmaking. Shot in luscious black-and-white, the film takes on a psychedelic quality as the camera weaves through the brush, as water droplets fall onto ferns and light pours through the leaves. Exiting the theater upon this movie’s completion really does feel like the awakening from a dream.