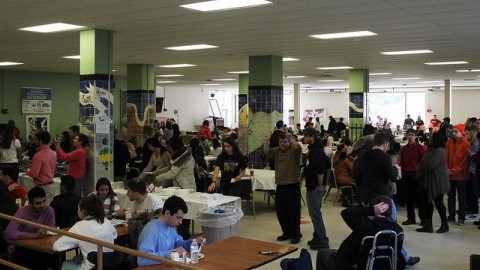 Cassidy Kotyla remembers her cousin and godfather Mariusz Skubisz as her favorite part of the holidays. Growing up in Connecticut as an only child, she appreciated having someone outside of her parents who would always look after her and check in to see how she was.

When Skubisz died on March 21 after a long battle with colon cancer, he left behind his 8-year-old daughter Emily. As Mariusz Skubisz was his daughter’s sole provider, Kotyla, a sophomore communications and journalism double major at the University of Massachusetts, began to think about what she could do to help support her second cousin Emily Skubisz.

Kotyla soon came up with the idea for Ice Cream for Emily, an ice cream social to raise money for Emily Skubisz’s college fund and for colon cancer research. The event will be held Wednesday from 6:30 to 9 p.m. at Newman Café.

“Everybody knows someone in their life that has been affected by cancer, and it’s so sad to hear that someone that is so young has lost a father figure in her life,” Kotyla said in a phone interview. “Especially being a broke college student, I can’t write a big check (to help support Emily Skubisz). I thought an ice cream social would be fun and also raise a lot of money.”

Tickets are $5 at the door and $3 presale, Kotyla said. Raffle tickets to win gift certificates to various local businesses, like Antonio’s Pizza and Judie’s Restaurant, will be sold for $1 each or $5 for seven.

Additionally, Kotyla said there will be booths set up where attendees can pay $3 to pie a member of Greek Life in the face, including members of Kappa Sigma and Alpha Sigma Phi. Kotyla said that newly elected Student Government Association President Anthony Vitale will also participate.

Kotyla, a member of Alpha Chi Omega herself, said that her idea quickly gained support within her network.

“I have a lot of friends who were confident that I would do a good job (as event coordinator) or just that felt really connected to what I was doing,” she said. Roughly 15 students have volunteered to help out at the event by scooping ice cream, setting up and cleaning up, managing the raffles and collecting money.

“I’m hoping to get about $2,000 from various donations and at the door,” Kotyla said.

She added that several businesses have already donated, such as Big Y, Amherst Books, Judie’s Art Bar and Amherst Ice Cream. The GoFundMe account that Kotyla created currently has about $500 in it, she said. The money that has already been donated will also be used to purchase ice cream and other necessary goods for the event.

Proceeds from the event will be split equally between Emily Skubisz’s college fund and to support colon cancer research, although Kotyla said that she has not yet decided which organization to send the money to.

“I’m looking into a couple of organizations,” she said, adding that she is considering donating to Hartford Hospital in Connecticut. “The hospital that (Mariusz Skubisz) stayed in because they’re having a major research project having to do with colon cancer right now.”

Kotyla said that she expects approximately 150 attendees. Many members of her family will travel from Connecticut for the event, including Emily Skubisz herself, and Walter Skubisz, Mariusz Skubisz’s brother who has taken over caring for his niece Emily.