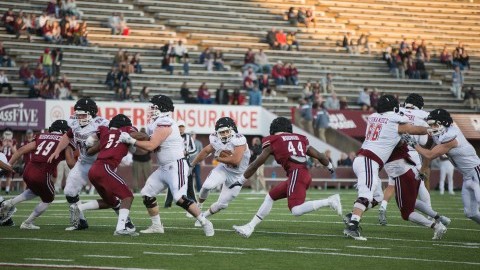 Heading into last year’s spring game – and throughout the 2015 season – John Robinson-Woodgett’s primary focus was on his defensive responsibilities as an inside linebacker for the Massachusetts football team.

After appearing in all 12 games last season, including one start, as a reserve linebacker where he finished sixth on the team with 57 total tackles (26 solo, 31 assisted), Robinson-Woodgett has spent the spring focusing on a new position on the opposite side of the football – as a fullback.

The 6-foot-1, 242-pound Springfield native played periodically at fullback last year, but UMass coach Mark Whipple has made the transition permanent heading into the 2016 season.

But in the Minutemen’s spring game, where he helped lead Team White to a 6-3 victory over Team Maroon, Robinson-Woodgett was the feature back in White’s offense, finishing the game with a team-high 13 carries for 63 yards.

“I enjoy it. I like playing offense,” Robinson-Woodgett said about the position change. “I like playing football so it doesn’t matter where I am on the field.”

“He’s a strong guy. He brings a lot of leadership, brings some toughness, bring a lot of toughness to the offense,” Whipple said. “It was really just what our running back situation was. He was the best guy so they made the decision to give him some carries – he’s gotten carries throughout the spring and he’s caught the ball pretty well.”

Robinson-Woodgett and Marquis Young (Team Maroon) were the only two active running backs who played for UMass last season. Both running back Sekai Lindsay and fullback Andrew Libby were inactive while recovering from injury. The Minutemen also graduated running back Jamal Wilson from last season, while Shadrach Abrokwah and Lorenzo Woodley are no longer on the team.

Robinson-Woodgett had one of the few opportunities for either team to score a touchdown for either team on the evening, but he elected to knee the ball at the 1-yard line with Team White threatening inside the 10-yard line during the final minute of play.

“I actually slid at the end. I kneed it on the one. We are taught to do that in that situation so we can just knee out the ball and get the game over,” Robinson-Woodgett said. “The touchdowns would have been nice if it came earlier in the game. That would have been better.”

Whipple had nothing but positive feedback to say when asked about his new fullback’s effort and cooperation while making the position swap.

“He’s been a leader and grown up a lot. He’s a player that is very well respected by the coaching staff and the players,” Whipple said. “He came through in the clutch in the fourth quarter. He carried the ball and ran tough.”

While Robinson-Woodgett knows he won’t be seeing as many carries when the Minutemen travel to Florida for their first game of the 2016 season, he said he’s going to be more than ready if Whipple calls in a fullback dive.

“I’m out here blocking for Marquis. (But) if coach gives me the ball, then I wouldn’t mind,” he said with a smile.