Kasich nomination possibly, but not likely 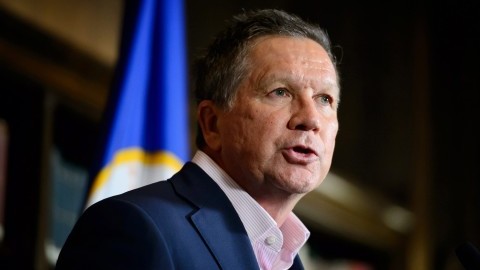 John Kasich hit hard against Donald Trump and Ted Cruz in a speech on Tuesday. Without specifically naming the two other GOP candidates, Kasich described the two paths that Americans have in the 2016 presidential election. According to The Atlantic, one of these paths is Kasich. The other path is one that would “drive America down into a ditch and not make us great again,” according to Kasich. Does the former path, the one where the United States faithfully follows Kasich on the steady road that America has voted for time and time again, really exist? Could Kasich truly win?

So far, Kasich has won only Ohio, which is his home territory. Outside of that accomplishment, with only 143 delegates, he trails Cruz by almost 400 delegates and Trump by nearly 600. He’s even losing to Marco Rubio by 28 delegates, despite Rubio dropping out after the Florida primaries.

Keep in mind that Kasich needs to win more than 100 percent of the rest of the delegates to reach the 1,237 needed to grasp the nomination before the Republican convention this summer. Furthermore, he is trailing in New York, according to ABC News, with a projected 19 percent of the votes as compared to 20 percent for Cruz and 56 percent for Trump.

He cannot clinch the nomination before the convention. It’s impossible. Perhaps he could be the Vice President. Trump said to USA Today that he would consider Kasich, in addition to Senator Rubio and Scott Walker, as a possible VP. Kasich, however, would likely not soon agree to that proposal. In his own words on “CBS This Morning” on Tuesday, there is “zero chance” he would consider being Trump’s running mate.

“Look, I am running for president of the United States. And that’s it. If I’m not president, which I think I have an excellent shot to be, I will finish my term as governor and then maybe I’ll be a co-host on this show. You never know,” Kasich said to CBS Tuesday.

With the option of Vice President eschewed, the only way John Kasich could win would be to present himself as the “establishment” alternative at the GOP national convention.

This comes at an extreme difference to how the 2016 primaries have been going. The race is largely about revolution against the establishment. The results so far, with Trump in the lead and Cruz not too far behind, show America’s distaste and dissatisfaction with party politics and elites. The average American voter wants something different.

Luckily for Kasich, the establishment and party elites usually drive the convention. If he manages to get his name on the ballot there, he has a real shot of becoming the nominee.

“I will not take the low road to the highest office in the land,” Kasich has maintained. This is his political brand, his essential selling point to voters. He will stay in the race, no matter how unlikely his chances look, to label himself as the candidate who refused to resort to an “anything goes” policy. He angled himself as a starkly different presidential hopeful than Cruz or Trump. This is necessary to have a chance at the convention.

If Kasich stays in the race long enough and can cozy up to Republicans who don’t support the “Cruz crew” or “Make America Great Again” he has a genuine shot at being president. The race is far from over, and so is Kasich.