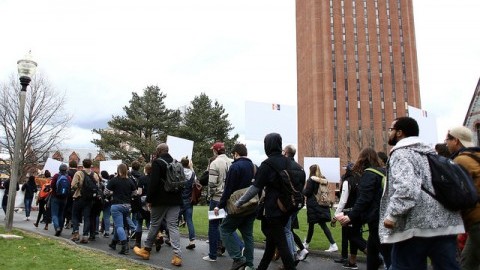 The premise of the editorial “It’s time to join the conversation” was that there is a strong undercurrent of racism, cisheterosexism and ableism running through the supposedly progressive town of Amherst, and that we must acknowledge and combat this threat. Bigotry in any form is indeed appalling, and it ought to be confronted when it appears. However, anybody who claims that the insidious threat of ableism is a major concern for society is either dangerously out of touch with reality or intentionally obfuscating the truth.

It seems to me that progressives and liberals, amongst whom I count myself, have a supply-and-demand problem when it comes to bigotry in America. The demand for misogynists, racists, ableists, etc., from the left is apparently insatiable, and the supply is often contrived. The editorial references an “incident” in which somebody changed a “Black Lives Matter” display to “All Lives Matter.” Was this a racist who hates African Americans or a 19-year-old who did something stupid?

By no means am I claiming that bigotry in its many forms does not exist. It always has and it always will. But this quest for social justice has devolved into what is little more than a witch hunt that Joseph McCarthy himself would be proud of. I believe that this social crusade is largely borne of legitimate concern for the oppressed, but the road to hell is paved with good intentions.

The most dangerous instantiation of the mindset demonstrated by the Massachusetts Daily Collegian editorial board occurs when it has permeated to public discourse and the exchange of ideas. When we are overly eager to label and persecute offensive “bigotry,” we soon become willing to persecute ideas we find distasteful. This may sound far-fetched, but illustrative examples abound from campuses across the country, ranging from the merely comical to the unbelievable.

Milo Yiannopoulos, known for his highly provocative critiques of feminism, was disrupted and shouted down by Black Lives Matter protestors and feminists during a talk at Rutgers University. A student movement at the University of California Berkeley (the home of the free speech movement) tried to disinvite Bill Maher from giving a commencement speech after he discussed Islam on his television show.

The most striking example, however, was a movement at Brown University to stop Janet Mock, a black transgender woman, from speaking just last month. In case that didn’t register, Brown University students petitioned to stop a black transgender woman from speaking at their school, and they succeeded. Their rationale? The event she intended to speak at was connected to Brown’s Hillel chapter, which some students apparently found objectionable. My utter disdain for these student movements in no way represents a disagreement with the students’ ideological objections to these speakers. It is more fundamental than that.

The foolishness on display in these stories ought to be obvious, but apparently that is not the case. College is not intended to support our preexisting and comforting notions of how the world works, nor should college be tailored to make each and every student feel intellectually safe. We must not react to distasteful ideas by shouting down people who disagree with us or by crying racism, ableism, cisheterosexism, sexism, xenophobia or Islamophobia. This is absolutely critical, and it is why we must be careful when assessing the state of bigotry on campus and in society at large. I am concerned that the same mindset which generates much of today’s social justice campaign is also stifling free speech and the exchange of ideas in the very place where those attributes ought to be cherished above all else.