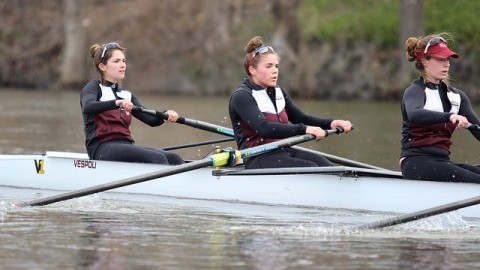 The Massachusetts rowing team took home two silver medals in a quad-regatta against Boston University, Dartmouth and Northeastern Saturday morning on the Charles River in Boston.

Conditions were just about pitch perfect for the regatta, as the wind was only six miles per hour, which resulted in calm water and made for great racing weather.

UMass competed in the Varsity 8 in the first event of the day and finished in 6:40.3, nine seconds behind Northeastern, who crossed the line at 6:31.6.

Out of the four schools, Dartmouth left with the most hardware, bringing home five medals, one from each event, and was followed by the Huskies who earned four medals. The Terriers earned a single medal.

The Minutewomen will have a three week rest period until their next race, one of their biggest of the season. UMass will head to Fairfax Station, Virginia on May 8 to compete in the Atlantic-10 championships on the Occoquan Reservoir. The Minutewomen will look to win their third conference title in a row, and 16th in program history when they square off against their conference foes, including longtime rival Rhode Island.