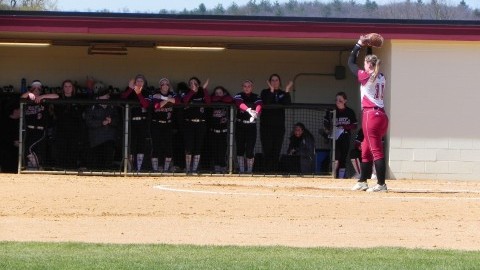 After three straight games being postponed or cancelled due to rain or snow, the Massachusetts softball team played its first games in a full week on Saturday against Saint Joseph’s. Meg Colleran showed no signs of rust.

In an eight-inning pitcher’s duel in the first game of the day, there was little to show in terms of offensive power for UMass (10-19, 4-3 Atlantic 10). However, strong pitching from Colleran allowed the Minutewomen to stay in the game.

In a complete game performance, Colleran struck out five and walked only one while allowing nine hits. UMass’ bats finally put two runs on the board in the bottom of the eighth to backup Colleran’s efforts, earning her ninth win of the year.

Not only did Colleran drop her earned run average from 2.38 to 2.29 after the first game, but she extended her hot streak in the circle and had allowed just three earned runs in 27 consecutive innings pitched.

In the second game, Colleran took the mound as the starter for the Minutewomen again. After allowing four runs off three hits through three innings, including giving up a three run home run to the Hawks (13-15-1, 4-5-1 A-10). Despite not allowing a hit in the forth, Taylor Carbone replaced Colleran in the fifth inning, pushing her to first base for the remainder of the game.

When asked about her ability to maintain enough stamina to pitch 12 innings in one day, Colleran credited the team’s conditioning work, in particular the work UMass did in the fall and winter.

As for her mentality going into Saturday’s doubleheader after having so many games called off as of recently, Colleran seemed unfazed.

“I don’t think it affected that much. We got some really good practices in. If anything, it gave us a chance to get better,” Colleran said.

Minutewomen coach Kristi Stefanoni was supportive of her star pitcher.

In particular, Stefanoni was impressed with Colleran’s ability to get batters out when St. Joe’s had runners in scoring position. “She was able to somehow get a fly ball or ground ball or even a strike out. That was really big,” Sefanoni said.

After all of her work Saturday, Colleran’s pitching record moved to 9-12 and an ERA of 2.46.

Leo Stern can be reached at [email protected]