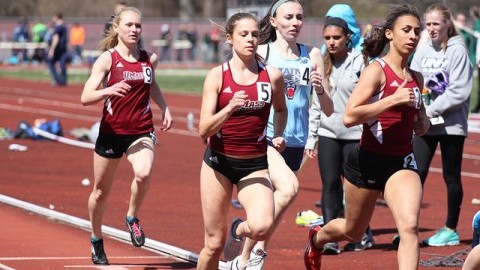 The Massachusetts track and field team kicked off the 2016 season in New Britain, Connecticut at the Central Connecticut Invitational. Both men and women’s teams took home second place finishes and had numerous great performances despite unsavory weather that caused several delays, some which lasted over an hour.

Groleau was extremely impressive in his victory. He took home gold with a time of 14:45.85, running shoulder-to-shoulder with Central Connecticut’s Matt Walker (15:12.86) until the first mile, before Groleau pulled away and never looked back.

Chuma took first in the pole vault with a leap of 14 feet, 5.25 inches, but had a lot of support from his UMass teammates. Brendan Lloyd (13 feet, 11.25 inches) and Nicholas Gemino (13 feet, 5.25 inches) took second and third respectively. The Minutemen earned a combined 24 in the event, a large part of their 201.5 team points. UMass finished in second place in the meet, just behind the Blue Devils who earned 225 points.

In the long jump, Arneaud took first with a jump of 22 feet, 22.5 inches, an impressive mark considering rainy weather.

The 4×400 meter relay team of Arneaud, Youssef Elkorchi, Cory Adelson and Alexander Finestone were runners up in their event with a time of 3:28.95, one of a number of second place finishes for the Minutemen. Jay McMahon took second in the steeplechase and Evan Burton also finished in the top two in the discus throw.

Also reaching the podium in their respective events were Brett Davies in discus, Warren Charleston in triple jump and John Long in javelin.

“We had very good performances all around, especially considering the difficulties with the weather,” coach Ken O’Brien said. “We scored very well in the jumps, as well as in the sprints and hurdles. I was also very impressed by the freshmen in their first collegiate meet, especially Eric Waterman (fourth in steeplechase at 9:27.33). He ran a very tough race on a very tough day, and he really came through for us.”

The Minutemen are back in action on Friday at the Sam Howell Invitational in Princeton, New Jersey. They’ll return to Amherst for their home opener the next day in a four-team meet set to begin at 11:30 a.m.

Led by Kelsey Crawford and Bridget Deveau, the Minutewomen also earned a second place finish at the Invitational meet in New Britain, Connecticut.

Crawford took home two golds medals, winning both the javelin (139’5”) and shotput (43’5.25”). Deveau won two events as well, taking the 400-meter hurdles with a time of 1:03.87 and leading the 4×400 meter relay team to another first place finish. Overall, Deveau earned a whopping 28 points for UMass in the meet.

Deveau, Melissa Beaupre, Olivia Weir and Caroline Leung made up the winning 4×400 team with a time of 4:01.04.

Meghan Patrolia was another winner for the Minutewomen, taking first in the 100-meter hurdles with a time of 15.15 seconds. Colleen Sands was the final first place finisher for UMass, winning the 5000-meter in 17:16.55, 45 seconds ahead of Hartford’s Carly Schuyler.

Also performing well were Margaret Riseborough (second place in shotput) and Tatiyanna Sanders (runner up in the 100-meter and long jump) to add depth to the Minutewomen’s showing.

“The team performed very well, as expected,” assistant coach John Adamson said. “We had a lot of confidence in the team going in and I think they worked hard to meet our expectations and perform at a very high level.

“Deveau and Sands were particular stand outs, but we knew that they could perform at this level and kudos to them for coming out and proving us right in the first meet of the season.”

The Minutewomen’s next meet is their home opener at the Leap Year Tri Meet on Saturday in Amherst, set to begin at noon.