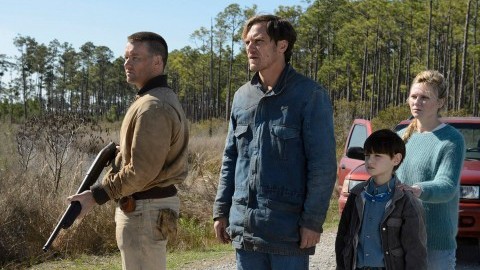 “Midnight Special” is a film that trusts its audience. Where some films seem to oversimplify themselves, and others are jam-packed with exposition and detail to the point of being an overwhelming slog, writer-director Jeff Nichols’ latest feature is steady and artfully deliberate.

Nichols seems to understand well what level of detail detracts from a given scene’s stakes, and how far the audience can read into something like the beats of silence in a conversation or a quick glance between characters.

Beautiful cinematography and design and a well-chosen cast contribute heavily to the solidity and confidence of purpose that “Midnight Special” enjoys, and it is reminiscent in these ways of the films of director Steven Spielberg at the height of his career.

When the film opens, we don’t know if it’s the modern day or the 1980s. Lush nighttime shots replete with orange street lamps and violet nighttime landscapes establish the stakes early on.

A boy, Alton (Jaeden Lieberher) has just been kidnapped from the compound of the religious cult that worships him as a messiah. His father, Roy (Michael Shannon), is responsible. With the help of Lucas (Joel Edgerton), a long-lost friend from before the compound, Roy is trying to transport Alton to a specific set of coordinates by a given date.

From the beginning, we get the sense that something is off about Alton, and we gradually learn why: Alton possesses mysterious powers that have made him of interest to both the church’s authoritarian pastor Calvin (Sam Shepard) and government figures like NSA analyst Sevier (Adam Driver). As the date approaches, the stakes only grow higher.

The film often leaves things unsaid, opting to let the audience to infer or interpret on their own. When it gives us a crumb of information, it achieves two things: it leaves the sense of mystery intact, and makes sure those mysteries are the big questions an audience has, instead of possible plot holes stemming from complicated or contrived exposition. The suspension of disbelief is preserved because the film simply takes it for granted that these things are happening.

The elements of design and cinematography are the two strongest boosters for this film’s tone and sense of place. “Midnight Special” touches on something so many other films set in the present neglect: How much of the past just sticks around out of inertia or convenience.

Calvin and his parish of doomsday preparers dress in a style that looks as much like the formal or non-fashion attire of the late 70s and early 80s as it does like something out of “Little House on the Prairie.” Old technology sticks around because it still works, and old styles stick around because change is slow.

Adam Stone’s cinematography, from the long shots to the lighting, grounds us in this world, where the present isn’t being ignored – it’s just not always relevant.

But it’s the acting that ties the film’s various ambitions together. Lieberher is never too precious in his delivery, and his rapport with Shannon is real and moving. Similarly, Kirsten Dunst delivers a strong performance as Alton’s estranged mother, never pigeonholed solely to support or encouragement, and that allowance of her character helps maintain the emotional stakes of the film.

Joel Edgerton is often a cipher as Lucas, but warmth and commitment come through in his stoic expressions and raspy delivery nonetheless. Supporting actors like Sam Shepard and Adam Driver are perfectly suited to their roles, giving us alternate (but not always sympathetic) perspectives and more reasons to stay invested in the outcome of Roy and Alton’s mission.

And on top of these, Shannon stands out as Roy, giving an understated performance in a film chock full of them. At times, Shannon’s deep, expressive eyes seems to be channeling George Clooney or Humphrey Bogart by way of Ewan McGregor, adding to his silences and direct manner as tools that express an intensity that is seething without being moody. Shannon’s working relationship with Nichols clearly benefits the film; this is their fourth collaboration.

Overall, “Midnight Special” is an engrossing nugget of a film that draws you in so that you can’t help but share in its moods, from gut-clenching tension to grinning elation. The cinematic equivalent of the well-made play, “Midnight Special” succeeds in telling the story that it wants to, and understands why.