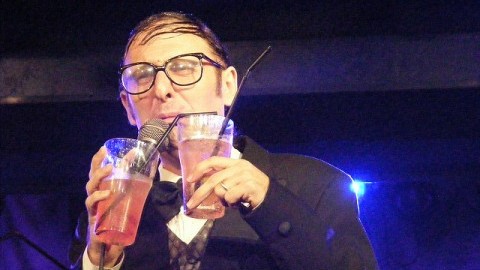 NORTHAMPTON – Last Monday evening, cult stand-up comic Neil Hamburger performed his routine at Northampton’s Iron Horse Music Hall as part of his latest nation-wide comedy tour promoting the 2015 film, “Entertainment,” of which he is the focal point. Neil Hamburger is a character that represents the alter-ego of actor Gregg Turkington. Hamburger was supported at this show by fellow alternative comedian and singer-songwriter, Mike Hickey, better known as Major Entertainer Mike H.

Mike H. has been connected to the character of Neil Hamburger since they both starred in Tom Green productions over a decade ago. While Turkington does record music in character as Hamburger, those songs (as well as music of any kind) are absent from his stand-up comedy. Mike H., on the other hand, heavily incorporates his original music into his live comedy shows.

Mike H.’s stage setup was unconventional and more complex compared to other comedians, especially for an opening act. He had a synthesizer in a suitcase that sat atop a stool, which he used to play beats for his songs and to produce screeching UFO sound effects after delivering jokes with the most cringe-worthy punchlines. An old drummer was stationed at the back of the stage, where an old projector and white screen played highly sarcastic or downright surreal slides and awkwardly changed them throughout his performance.

Mike H. had more comedic songs than he did standard jokes, but his wild and over-the-top energy while he was singing self-deprecating lyrics made his songs the main focus. The song he opened up with seemed to desperately plead with the audience to like him and to tolerate his singing pitch, which he repeatedly described as his “tiny voice.”

The major highlight of his 40-minute routine was midway through when he burst out into a bombastic and melodramatic arena-rock-power ballad describing how he knows and understands that any audience does not want to sit through an opening act at any concert and apologized for them being stuck with him until Hamburger’s set. Up until the abrupt ending, in which he packed up and left the stage without warning, Mike H. was an eccentric and engaging comedian that was intensely animated and made a great effort to enhance audience interactivity with his songs and jokes. All of which made it even more strange to have him open for Neil Hamburger, seeing as Hamburger’s act was the complete opposite to all of these elements.

Neil Hamburger’s physical appearance played a big part in what made his act humorous. Like every single other standup routine he has performed, Hamburger grumpily shuffled to the stage carrying four drinks in one arm and sporting a stained suit, a perpetually scrunched-up face and a disgusting attempt at a comb-over resulting in wet strands of thinning hair splayed across his forehead in an appalling fashion. He loudly cleared his throat before the start of nearly every joke, sounding near-death at times, and delivered all of his confounding zingers in an off-putting, outlandish voice that resembled an aging sports announcer from the 1950s.

Hamburger’s entire set was a string of incredibly foul and mean-spirited question-and-answer jokes that took politically incorrect, cruel jabs at famous musicians, such as Gene Simmons and modern celebrities such as Paris Hilton.

For example, for one of his jokes he asked the audience, “What do you call a senior citizen who can’t refrain from exposing their genitalia in public?” to which he answered, “Madonna.” These punchlines alternated from being subtly witty to shockingly poor in taste. The jokes themselves were delivered with such slow pacing and intentionally poor comedic timing that it either resulted in audience members laughing hysterically or being lost and perplexed at how unorthodox Hamburger was in his nature.

The tone of the humor was consistently dark and cynical and often careened into the abstract. Aside from the exaggerated contempt and vulgarity expressed in his question and answer jokes, Hamburger sometimes trailed off into excessively morbid and ultimately pointless stories with no climax or punchline. He also often abruptly paused to loudly gurgle and hiss at anyone in the audience that may have been talking.

Both Mike H. and Turkington did great jobs in setting their comedic personas apart from each other, but also in keeping the overarching ironic themes of the night consistent, which made for a well-spent two hours of material where shame was not a forethought.

Alexander Beebe can be reached at [email protected]