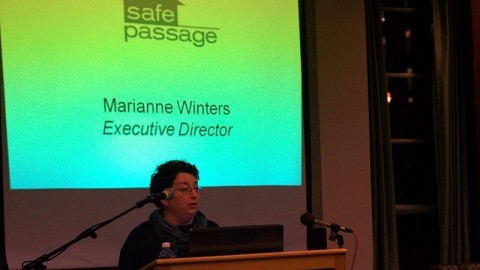 For almost 40 years, Safe Passage in Northampton has worked to make a difference in the lives of victims of domestic violence through support, advocacy and programs to change the culture surrounding domestic assault.

Marianne Winters, executive director of Safe Passage since 2011, said the organization first emerged in 1977 under the multilingual name “Necessities/Necessidades.”

“It started as an all-volunteer effort in a time when people in general didn’t recognize that domestic violence was happening,” said Winters in a phone interview, adding that victims would have felt deeply isolated. “There just wasn’t a lot of understanding of the issues back then.”

However, with the rise of the feminist movement, Winters said an increasing number of people took action in hopes of preventing violence against women and supporting those whose lives had already been impacted by violence.

“When we think about the ways that social services respond to domestic violence now, it wasn’t like that at all 40 years ago,” said Diane Curtis, president of Safe Passage’s board of directors. Curtis also happens to be the director of pre-law advising and a senior lecturer of political science at the University of Massachusetts.

Curtis described secret hotlines that victims could call for support and safe houses that were run out of volunteers’ homes.

Eventually, Winters said, as part of the grassroots movement that was happening around the country, the volunteers rented a space for an official safe house in Northampton.

“It is the one place that anyone can call and come if they have any experiences themselves or with someone they know who’s experienced domestic violence,” Winters said of Safe Passage, which has grown to become the primary domestic violence agency in Hampshire County.

She added the organization is there to help people who question if their relationship is healthy, all the way up to those who fear for their lives.

Most people, Curtis said, are familiar with the shelter itself but less so with Safe Passage’s other programs.

“The whole idea (of the shelter) is to help people stay and shelter somewhere confidential and outside of their local area in order to keep them and their children safe,” she said.

The shelter houses six families at a time and sheltered 50 families in the 2014 fiscal year, according to Safe Passage’s website.

“One of the fantastic things about (the Say Something Prevention Program) is it works with small groups of people,” Curtis said. “We call them LABs: Learn, Act, Be. It’s a four-week session to help people learn how they can intervene in potentially violent situations well before it escalates to violence.”

Curtis said the program, which began two years ago, is about training individuals to recognize the cues that could predict violence while also “working on changing the culture around assault and domestic violence in the local area.”

According to Winters, sexual assault is considered one of the risk factors.

“We know from research that when we hear that sexual assault is a part of domestic violence, it could be an indicator of a higher risk of violence, or even a greater risk of homicide or attempted homicide,” said Winters, citing research by Jacquelyn Campbell.

Curtis said Derek Doughty, a member of the Safe Passage board of directors who also works in both the UMass Dean of Students Office and the athletic department, is working to expand the program to UMass.

Safe Passage also works closely with the Center for Women and Community at UMass, the area’s primary resource for sexual assault victims, Winters said, as sexual assault is often “part of the dynamic of domestic violence.”

While Safe Passage does not have programs specifically aimed for sexual assault victims, Winters said the organization’s counselors are trained to handle both issues as there is “a lot of overlap” between the two.

A lot of Safe Passage volunteers are members of the UMass community. Curtis said faculty and students frequently participate in the annual Hot Chocolate Run, which features a 3K walk and two 5K runs throughout Northampton to raise money for Safe Passage.

“What is unique about Safe Passage is our local community has really started sustaining our efforts,” Winters said.

While 40 percent of the organization’s $1.5 million yearly budget comes from the Department of Children and Families and other state and federal agencies, the remaining 60 percent comes from donations, including what is raised during the Hot Chocolate Run, according to Winters. The 2015 Hot Chocolate Run, which attracted 6,000 participants, raised $485,000 for the organization.

Sisters on the Runway’s sixth annual fashion show, which is on April 17, also benefits the organization. During the annual UMass Amherst Community Campaign, which allows faculty to donate to any charitable organization through payroll deductions, a large number of faculty choose to donate to Safe Passage, Curtis said.

“I think it’s fantastic there’s so many connections between UMass and Safe Passage,” Curtis said. “There’s so many students and staff and faculty that really care about this issue and who give so generously to Safe Passage.”