The Morning Wood giving you the latest 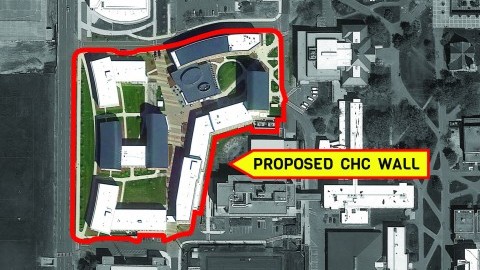 The Morning Wood is back and filled to the brim. The Commonwealth Honors College plans to secede from the University, while administrators plan an elaborate moat around Whitmore Administration Building this month for safety purposes. The Chancellor continues to exhibit strange behavior since binge-watching popular series House of Cards, including granting RAs and PMs just cause in their contracts. In popular news, the few remaining who use Twitter are witnessing a dramatic change in the interface with the removal of the platform’s “tweet” function, and men’s basketball coach Derek Kellogg officially signed the highest paid hair endorsement deal with L’Oreal.

Students want to build a wall separating itself from the rest of campus, plan to make other residential areas pay for construction.

You may need to sit down for this: RAs and PMs finally granted just cause

Construction of a crocodile-filled moat will begin around Whitmore Administration Building sometime in April.

Students riot at The Boulders to protest living conditions

The popular Netflix original series has had an odd effect on the University’s chancellor.

Urinals: How our infrastructure divides us

Chap Lipsenstock advocates for urinals of equal height and for partitions between urinals to be taken down.

The Morning Wood provides an eclectic sample of films to help you start off on the right foot with a potential sweetheart.

Nathan Frontiero and Mark Chiarelli offer their hottest takes in this spoiler-filled video review of the new superhero film.

In an effort to address user concerns, the social network has decided to get rid of the original feature from which it takes its name.

Kellogg officially signed the highest paid endorsement deal with L’Oreal in a hair deal to end all hair deals.

UMass athletic director Ryan Bamford has reportedly left several messages at multiple conference commissioners’ offices, but has yet to hear a response.

UMass hockey names Gordon Bombay as its next head coach

After coaching the Mighty Ducks to the Minneapolis District 5 peewee championship in 1992, Bombay will come out of retirement to coach the Minutemen.