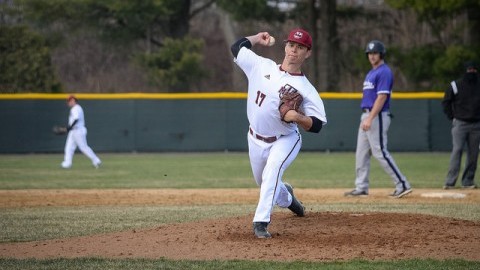 After falling to Boston College in the 2015 Beanpot tournament final at Fenway Park, the Massachusetts baseball team was looking for revenge as the teams faced off in the first round in 2016.

A pitching duel ensued, but a late eighth-inning run was the difference as the Eagles (18-11, 5-8 Atlantic Coast Conference) defeated UMass 2-1 for the second straight time in the Beanpot and fifth straight time overall.

“We played well and really hard so I was proud of them,” Minutemen (7-14, 2-4 Atlantic 10) coach Mike Stone said. “(Losing in the first round) is not what you want, but I told them we played two good games recently.”

Defensive issues came back to hurt the Minutemen in the eighth inning. BC’s Michael Strem started the rally with a two-out single off of Mike Geannelis. Strem went on to steal second and went to third on a wild pitch. The next batter, Joe Cronin, singled to right to drive in the game winning run.

But the real issue for UMass was its inability to drive in runs. The Minutemen’s lone run came in the seventh inning when Vinny Scifo scored freshman Ryan Lever on a bunt to tie the game at one, after Lever poked a one-out single to start the offense. UMass failed to get anything else going in the eighth or ninth inning.

The Minutemen stranded seven runners on base while outhitting the Eagles 7-6 in the loss. Stone was extremely blunt and thinks his team needs to do better in those situations.

“We just need to hit,” Stone said. “We left five men (on base) in scoring position, we just need someone to square one up.”

The Minutemen’s first six hitters went a combined 2-for-23 leaving all seven runners on base. Lever, Avallone and Scifo carried the load going a combined 5-for-10 with a run batted in and a run scored.

“The bottom of the order did everything today,” Stone said. “But we need to get everyone to contribute.”

It has been a struggle for the Minutemen getting those contributions from both the top and bottom of the order. Stone was happy to see the bottom of the order do what they did today, but needs to see more from the hitters at the top of the lineup.

“That’s the point, we need to get everyone on the same page,” Stone said. “It is real important to get the bottom half going but we need the top half to perform too.”

UMass did get strong performances from its pitching staff. Kevin Hassett was called upon to face the tough Eagles lineup and he delivered. The sophomore went three innings, giving up one run while striking out three. Tim Cassidy followed Hassett and kept the Minutemen in the game. Cassidy went three innings as well but did not allow a run. Like Hassett, Cassidy struck out three batters.

“They battled and made pitches,” Stone said. “Hassett and Cassidy pitched well and got out of a couple of jams.”

Geannelis relieved Cassidy in the seventh and pitched a strong inning before allowing the game-winning run to cross in the eighth.

BC’s Thomas Lane went 4.1 innings giving up three hits and no runs. John Witkowski got the win in an inning of work for the Eagles, and Jesse Adams nailed down his first save of the year behind a 1-2-3 ninth.

“We had our chances to open the game up,” Stone said. “We did not see anyone overpowering, we were just unable to get guys across.”

The Minutemen will look to get back on track in a big A-10 battle against Saint Joseph’s on Friday in Amherst.