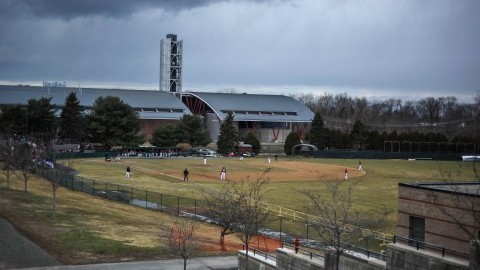 It wasn’t alumni weekend, but the sense of Minutemen pride was prevalent in Amherst when the Massachusetts baseball team paid homage to its 1996 team that finished with a 40-13 record en route to Atlantic 10 regular season and tournament championship titles.

The current Minutemen paid their respect to the ‘96 team and newly inducted UMass Hall of Fame member Doug Clark from the late 90s teams by donning throwback hats featuring the former UMass logo, honoring the former championship players on the field before Saturday’s 6-1 loss to Saint Joseph’s.

The middle infielders for the championship team – shortstop David Giglio and second basemen Muchie Dagliere – were two members on hand for the ceremony and were excited to be back on their old stomping grounds at Earl Lorden Field.

“It’s awesome (to be back),” Giglio said. “It’s been a few years since I’ve been back here, so it’s pretty awesome. The field looks amazing. It’s good to see some old faces and see some of these guys (that you haven’t) in actually 20 years. It’s an exciting day.”

“Being back in this environment, this is where we gained our relationships with our buddies,” Dagliere added. “We went through blood, sweat and tears on the sidelines and these are your buddies that last a life time. To be all together after 20 years or so, it makes it very special for us.”

The hats donned by UMass in yesterday’s affair were the hats worn by the Minutemen through the 90s. Adidas and athletic director Ryan Bamford were behind bringing back the familiar logo to pay tribute to the historic team 20 years later. Bamford did the same thing earlier this year when the UMass basketball team honored the 1996 Final Four team by wearing throwback jerseys for select games this season.

“It’s cool,” said Bamford of the tribute. “It’s a neat little touch for us. Anytime we can do that – Adidas is a good partner in helping us with our uniforms – it’s always a great situation.”

“It was awesome,” said UMass senior captain John Jennings after Saturday’s game. “I’ve seen a couple of them come back for alumni game in the fall. It was exciting, I thought it would fire us up a little bit more than it did. I thought we’d put up some more runs and a better fight. But, it was definitely awesome having them here.”

The Minutemen lost the game 6-1 to St. Joe’s in the middle game of their three-game series.

Giglio was still appreciative of the gesture of respect paid to them with the hats from UMass administration. “It’s kind of a cool little surprise,” Giglio said. “It’s awesome.”

Dagliere’s bond with the 1996 team goes a bit further than other members on the roster. After their victories in the A-10 tournament, the second basemen went out and got a tattoo of the “UM” logo that the Minutemen featured on Saturday on his right shoulder to honor and remember an unforgettable season.

Dagliere attended Taft Prep school in Connecticut prior to spending his playing days at Earl Lorden Field. During that time, the second basemen played under Stone’s father, and went on to play under him at UMass in the late 1990s and recalled that Stone looked just as he did when he was managing the team 20 years ago.

“He hasn’t changed one bit,” Dagliere said. “He looks like he’s 35 years old. He’s really an amazing person. He does it right. Times change but morals and values don’t. He deserved every bit of this.”

Giglio had similar praise for the 29-year coach’s appearance.

“He looks exactly the same, it’s kind of crazy. He doesn’t age.”

Stone has been the one constant between the winningest team in UMass history and the present day squad. The coach took the field unannounced to pose for a picture with the members of the 1996 team that he led to the regional final.

Stone has been at the helm for 29 years as coach of the Minutemen. Bamford and his current and former players had much praise for the winningest coach in the program’s history.

“He’s influenced over 29 years a lot of men who have gone on to do great things in their lives,” Bamford said. “I think one of the things he really appreciates obviously being a former student athlete here is the power of the University of Massachusetts. He perpetuates that over the 29 years that he’s been the baseball mentor. For him to have those guys come back I know means a lot. Because of their influence on this program and the effect that they’ve had, it’s a really special thing for him and I know he was looking forward to this weekend especially.”

“He’s seen it all,” Jennings added. “He knows what he’s doing. It’s nice having someone with a lot of experience to show you the way.”

When asked about his longevity during his tenure at UMass, the coach didn’t appear as nostalgic at first, but then touched upon his nearly 30-year run as a coach of the Minutemen.

“Sometimes it feels like there’s no way it could be 29 years. But when you think about it in a numbers perspective and I guess it does seem like it’s a long time. I’m still active and part of the pregame deals – throwing batting practice and hitting fungos,” Stone said. “So I don’t feel as old as I guess I am. I still feel as if I have a good contribution to offer. I try not to think – I mean 34 years as a Division I head coach – it’s a long time I guess.”

“My goal every year is to focus on getting the most out of the team that we have and try and teach these guys one or two things along the way. I don’t get that sentimental, really. I hope that this ball club gets on track and can have some fun, experience some success,” Stone added. “I don’t feel like we’re far away, we just need to do a little bit more. We need to get a little bit more offensively to get this team in a position to win more often.”

Bamford and Giglio were still happy to represent the University Saturday and recalled the memorable team from 1996 that won 18 consecutive games, an NCAA season record, and 40 total games for the first time in school history.

“It was a fun year,” Giglio said. “It was a good team. We were fortunate to be as successful as we were. When you’re doing it you’re kind of in the moment, but when it kind of settles down and you kind of look back on the overall numbers and where we stood in the nation, it’s pretty special.”

Bamford added: “We talk to our student athletes about understanding what our past is, what our history is and appreciating it because you can’t figure out where you want to go until you figure out where you’ve been. Having our ’96 come back, any time we get a chance to bring alums back to be around our young people and to celebrate the success that we’ve had is really important to our organization and to the development of our future. It’s great. I’ve met a bunch of these guys. It’s a special weekend for us and in our baseball program especially.”