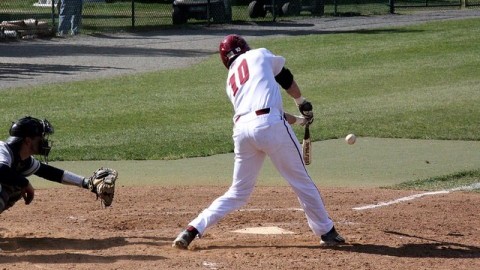 It’s been a rollercoaster season for the Massachusetts baseball team in 2016.

That is the perfect way to describe the up and down nature of the Minutemen this year. After losing seven of eight games to start the season and after a 17-7 shellacking by Saint Joseph’s on April 17, UMass has won four of five games in the past week and a half.

The ride just keeps going up and down, and the Minutemen (11-18, 4-8 Atlantic 10) hopes they will continue their ascent and hot play as they take on Quinnipiac (16-22, 6-6 Metro Atlantic Athletic Conference) Wednesday in Hamden, Connecticut.

The Bobcats are also coming into this game on a run of success as they have won seven of their last nine contests.

Minutemen coach Mike Stone is hoping the hot play from his team recently will give them momentum going into Wednesday’s game.

“It’s always good for confidence when you’re stringing lots of wins together to create momentum going forward,” Stone said. “We know we’re in for a tough game on Wednesday, so it’s important we go in confident.”

Third baseman Jon Avallone believes these non-conference matchups are very important for UMass as it enters the late part of the season.

“Picking up wins in these non-conference games is very important for being a confidence builder,” Avallone said. “When you get those wins, you go into conference play feeling better about where you are as a team.”

Quinnipiac has been a tough team to beat at home as they sit at 5-2 at QU Baseball Field. On the other side the Minutemen have struggled to play well on the road with a 3-8 mark on opponent’s home fields. Stone understands UMass’ struggles away from Earl Lorden Field, but doesn’t believe it will be a big factor for Wednesday.

“Whenever you are playing on your home field, you are always going to have the advantage,” Stone said. “We’ve had good success down at Quinnipiac in the past, so we feel confident that we will come out strong when it matters.”

The Minutemen will call upon freshman Casey Aubin to start on the mound for Wednesday’s game. Aubin comes into the game with a 2-2 record and 5.27 earned run average. The Durham, N.H. native is coming off possibly his best start of the season against Harvard where he went 5 1/3 innings while giving up two runs, neither of which were earned.

Aubin will have his work cut out for him on the hill as he will have to contend with a strong Bobcats lineup.

Quinnipiac has four players hitting over .300 on the season. The leader of that group is junior Matthew Batten, who comes into the game with a .352 batting average. The biggest power threat on the team has been outfielder Rob Pescitelli, who has five home runs this season.

UMass has had a pretty strong offense of their own. The Minutemen come into Wednesday’s game with three players hitting over .300. Two of the players are the usual suspects in catcher John Jennings and outfielder Mike Hart, who bat in the three and four holes in the lineup and are batting over .330 this season. The other is someone less expected: Avallone.

In a starting third basemen role this season, the junior has upped his average to .316 after a strong stretch of recent play.

“A lot of my recent success has to do with taking extra swings,” Avallone said. “Hearing what some of the guys have to say like Dylan Morris, Mike Hart, Hunter Carey, has been really helpful to better my play recently.”

First pitch for the game between UMass and the Bobcats is set for 3 p.m. Wednesday.