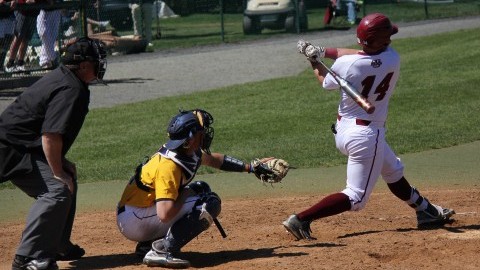 After winning four of its last five games, the Massachusetts baseball team laid an egg against nonconference opponent Quinnipiac.

The Minutemen (11-19, 4-8 Atlantic 10) struggled in every facet of the game, combining for only four hits in the 7-0 loss. Casey Aubin started the game for UMass going three innings, giving up four runs on five hits. His command was the major issue in the game, giving up two walks and three wild pitches.

“He didn’t have his best stuff today,” Minutemen coach Mike Stone said. “Gave up hits with 1-2 and 0-2 counts and struggled to give us a chance to be in the ballgame.”

The first inning resulted in Mike Hart scorching a two-out double. John Jennings popped up to end the frame. That became the lone hit UMass would muster against Bobcat starter Brandon Shileikis. The Bobcats junior went six innings surrendering the one hit while walking another. The Minutemen’s offense went cold today after scoring 19 runs over the weekend against La Salle.

“We didn’t lock in or compete at the plate,” Stone said. “Got behind early and we didn’t recover.”

In the bottom of the frame, Aubin gave up three of his four runs. Matthew Batten singled with one out to get the rally started. Aubin then gave up a single to Rob Pescitelli to set the Bobcats (17-23, 6-6 Metro Atlantic Athletic Conference) up. One of Aubin’s three wild pitches allowed the runners to advance a base. Its next batter grounded to second base to give Quinnipiac a 1-0 lead.

The Bobcats then got two clutch hits from Matthew Oestreicher and Joseph Burns. Oestreicher roped a double scoring Pescitelli and Burns followed with an RBI single increasing the lead to 3-0. That was all Shileikis needed as the Minutemen’s bats went quiet the next five innings.

“We didn’t see anyone special on the mound today,” Stone said. “There was nothing that I saw that (Shileikis) provided that was overpowering. I think we got ourselves out most of the time.”

Both teams went down quietly in the second and Aubin ran into a little more trouble in the third. After allowing back-to-back singles to begin the inning, a sacrifice fly by Burns gave the Bobcats a 4-0 lead. Aubin would get out of the inning without further damage, but that would be all he would go.

In the fifth, with Mike Geannelis on the mound, Brian Moskey blasted a solo home run stretching the Bobcat lead to five.

Jennings finally broke the 0-for-15 streak with a double down the line in the seventh. But the Minutemen failed to capitalize on the two-out rally as Hunter Carey flew out to end the inning.

“(Quinnipiac) was good today,” Stone said. “We didn’t play well, I mean we only had three hits until the ninth inning.”

Tim Cassidy pitched a strong seventh but Kevin Hassett ran into problems in the eighth. Two singles set up the Bobcats for Moskey once again. Moskey ripped a deep double to right center scoring another run for Quinnipiac as it would tack on one more later in the inning giving them a 7-0 lead.

UMass will need to forget about this game real quick as it has A-10 opponent Fordham coming to Amherst for a weekend series. The Rams have played well this season, going 8-4 in conference play.

When asked how his team will recover from the setback Stone had a simple answer.

“We have to, no question about it.” Stone said.