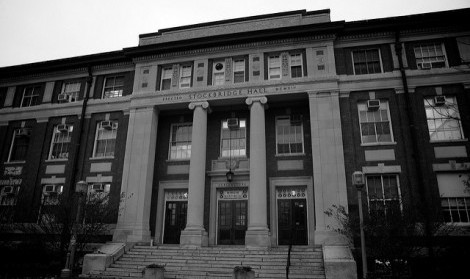 The event is titled “The Triggering: Has Political Correctness Gone Too Far?”

“Obviously we, as college Republicans, think that it (has),” said Nicholas Pappas, a senior operations and information management major and current membership chair of the club.

“We really want to give other students our perspective,” he said.

Pappas explained that the event isn’t solely about trigger warnings — it will also include discussions of microaggressions, cultural appropriation and issues of race and gender.

Hoff Somers is a former philosophy professor and current resident scholar at the American Enterprise Institute, a conservative think tank. Yiannopoulos is a British journalist and entrepreneur, while Crowder is a political commentator, actor and comedian.

“We picked them all because they were each speakers who played off each other’s strengths,” said Pappas.

Pappas described the panelists’ views as mainstream in many ways. According to Pappas, the event will include a question-and-answer session with the audience as well.

“We do want people to challenge the speakers. They’re very good at handling challenges,” Pappas said.

The event has sparked controversy, with a number of people expressing opposition to the event on its Facebook page.

“I think that the history of the three speakers is what is making the most people uncomfortable right now,” said Caleb Miller, a junior psychology and sociology major.

He pointed to Yiannopoulos’ funding of a scholarship, the Privilege Grant, specifically for white males. Hoff Somers also presents a non-intersectional brand of feminism focused on white, heterosexual women, he said.

Miller said he is concerned about the timing of the event so soon after multiple incidents of hate speech on campus, including an instance of “Stop Islam” graffiti reported outside the Fine Arts Center on April 4.

Miller plans to attend the event.

“I think that it’s important for students who oppose to it be there,” he said. “An opposition is necessary to present a dialogue to those people who may not be informed on these issues.”

Conner Dunleavy, a junior at the State University of New York (SUNY) at Albany, heard about the event from a friend who is a student at UMass.

“It’s interesting, to say the least,” he said. “It’s definitely a point of view I hadn’t seen before.”

Dunleavy said he agrees with some of the panelists’ viewpoints. He also said he hopes the panelists will discuss political culture on campuses and controversies that surround events like the panel itself.

Terrance Peters, a freshman on the computer science major exploratory track, said he disagrees with the club’s decision to only present individuals on one side of these issues. He said he also disagrees with people who say that the event should be banned.

“I would say that, even if (their views) are problematic, we should be able to hear them. They should have a platform just as everyone else on campus has that platform,” Peters said. “From either perspective, I feel there is much to gain from being able to talk about these issues,” he added.

The event will not allow audience members to bring any posters larger than 8.5 by 11 inches, Pappas said.

“The paper size rule is to prevent disruption, not protest. Often large signs are used to block out the view of others in the audience, the cameras, etc.…it’s a form of intentional censorship,” he said in an email. “This applies to everyone, of course.”

The club is paying for police presence out of its annual budget, although the event is not expected to become violent, Pappas said.

The event will take place in the Bowker Auditorium, with overflow seating with closed-circuit television planned for the Student Union Ballroom.

The club expects to fill the auditorium, he said.

The club is offering an Eventbrite page online to register for the event, which is free to all Five College students and faculty with a valid ID, and $5 for the general public.

Proceeds will be given to the American Legion, according to the event’s Facebook page.

Patricia LeBoeuf can be reached at [email protected] or followed on Twitter @leboeuf_trisha.