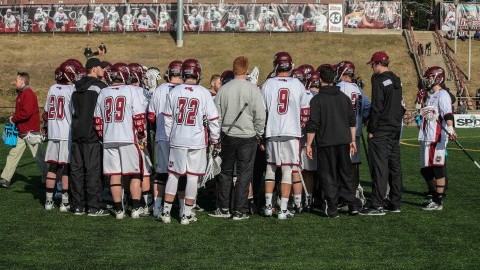 Coming off back-to-back wins against ranked opponents, the Massachusetts men’s lacrosse failed to bring itself over .500 for the first time this season, falling to Delaware 9-7 in its first Colonial Athletic Associate game.

UMass (4-5, 0-1 CAA) coach Greg Cannella felt the Minutemen’s effort was present, but they simply lacked the execution and finish on offense needed to secure the win.

“I think our effort was there, I don’t know about our focus or our execution, especially in the offensive zone,” Cannella said. “They zoned us on every possession, we worked on it all week, but we weren’t able to execute, finish the ball when we had our chances.”

DiSimone led the Delaware attack offensively, while his three goals and assist were good for his second hat trick in as many games after his three-goal, three-assist effort against Rutgers last week.

“He played very well last week against Rutgers as well. (He’s) quick, strong, he turned the corner one time and stuck the ball, so he’s playing with a lot of confidence,” Cannella said.

Prior to the Rutgers game, DiSimone had just three career collegiate goals to his name.

UMass did not struggle to finish at the onset of the game when freshman Tyler Bogart streaked down the alley towards the cage and buried a shot just 21 seconds after the opening faceoff.

Delaware quickly tied the game with a goal from Paul Major less than a minute later, but Gianni Bianchin regained the lead for UMass with a goal three minutes, 59 seconds into the first quarter.

A goal from Trupert Ortlieb with 59 seconds to play in the first quarter tied up the game before the close of the first frame.

Grant Consoletti opened up the scoring in the second quarter with a goal 3:53 into the quarter, but it would be the Minutemen’s final lead of the game, giving up the next three goals before Bogart added his second goal of the game with a minute to play in the half, sending the teams to the locker room with Delaware ahead 5-4.

Brendan Hegarty contributed the lone third quarter goal for either team, tying the game with 10:25 remaining. The goal came just moments after the Minutemen killed a stretch of penalty minutes in which they were down two men defensively.

Following over 15 minutes of scoreless play, the Blue Hens took the lead in somewhat of a controversial fashion when UMass goalkeeper Sean Sconone appeared to save a shot from Frisina, but was ruled a goal on the field. Sconone made the initial stop put the referee ruled the ball crossed the line on the ensuing scramble.

While Cannella did not believe the play should have been ruled a goal, he did not feel that the officials played a role in the outcome of the game.

Buddy Carr added his team-leading 15th goal of the season with two minutes to play, and Isaac Paparo scored almost immediately off the faceoff just 11 seconds later, but the Minutemen were unable to create anymore late game heroics, ending the game 9-7.

Sconone earned the first start of his collegiate career in the game. He had previously seen a total of 21 minutes of action, playing in just two of the Minutemen’s first eight games, before receiving the start Saturday.

“He played very well,” Cannella said. “Made some great saves, he made seven saves in the third quarter and kind of held us in the game.”

Cannella was pleased to finally see the evidence on the field of the work that Sconone has put in at practice.

“We’re happy for him. He’s worked hard all year, like the other guys, so hopefully he can be consistent,” Cannella said.

The conference competition does not get any easier in UMass’ next game, as the Minutemen get ready to host No. 8 Towson next Saturday at 1 p.m.