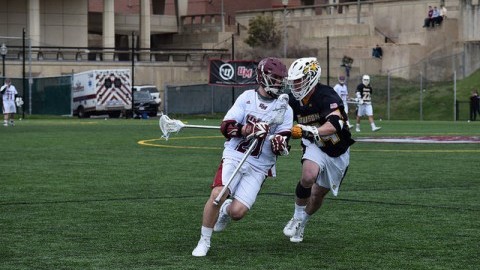 There are no more mulligans. There is no more wiggle room. After dropping its first three Colonial Athletic Association games, the Massachusetts men’s lacrosse team has its back against the wall as it tries to earn a bid to the conference tournament.

UMass (4-7, 0-3 CAA) will need to win its final two games and get some help from around the conference if the Minutemen want to be on the field for the CAA semifinals come May 5.

First up for UMass is its final home game of the season, a matchup against red-hot Hofstra this Saturday. The Pride (8-4, 2-1 CAA) will enter the weekend as winners of four of their past five games.

The Minutemen’s defense will be confronted with the task of slowing down the explosive offensive duo of Hofstra junior Josh Byrne and senior Sam Llinares.

Byrne (26 goals, 14 assists) is playing in his first season with Hofstra after transferring from Nassau Community College where he received the 2015 national junior college athletic association attackman of the year Award after tallying 76 goals and 30 assists in just 12 games.

Llinares (25 goals, seven assists) earned the CAA player of the year award last year after his 33-goal, 24-assist season, in addition to being selected in the fourth round of the Major League Lacrosse collegiate draft this past January.

UMass coach Greg Cannella believes that the combination of Byrne and Llinares, in addition to senior midfielders Korey Hendrickson and Brian von Bargen, makes for a potent Pride offensive unit.

“Llinares has been a handful and to put in a guy like Byrne, he’s a real good complement,” Cannella said. “Both of those guys can feed it and score it. Between the two of them it’s like 60 goals, but that’s not it, they’ve got two midfielders with over 50 goals, so tough matchups everywhere.”

Cannella has talked a lot this season about the need to score in the double digits in order to win games, something the Minutemen haven’t done since their 11-9 win over Penn State over a month ago on March 19.

“That’s why we’re 0-3 (in conference play), it honestly is,” Cannella said of their conference record. “In reality, our defense has played well enough to win those games. Defense plays well enough and keeps you in the game, we’ve got to be able to score double digits.”

UMass sophomore Buddy Carr believes the scoring chances have been there, but the Minutemen just haven’t take advantage of them.

“What we’ve been struggling to do is kind of put the ball in the net,” Carr said. “We’ve gotten good looks, but we haven’t tested the goalie even, and that’s what (assistant coach) Doc (Schneider) has been preaching, that we need to put the ball in net, put stress on the goalie.”

In order to put up the number of goals they will be looking for, the Minutemen will need to best one of the top goalkeepers in the conference.

Sophomore Jack Concannon has started for the Pride in the cage all 12 games this season, and has been on the field for all but one quarter.

During that time Concannon has tallied a save percentage of .579, the best in the CAA, and a goals against average of 8.41, good for second in the conference.

Carr believes the key to beating Concannon will be mixing up the shots that he sees.

“He’s good, he’s quick, he’s very good down low, he’s got good hands, but we’ve got to kind of mix up our shots, go high to low or low to high,” Carr said.

In their final home game of the regular season, the Minutemen are set to recognize their four seniors Bob Fahey, Kurt Hunziker, Kyle Karaska and Kevin Porzelt prior to Saturday’s game.

However, Cannella is more concerned with preparing for game itself rather than any pregame ceremonies.

“You hope they play a good one, you want everyone to win their last game on Garber, good memories for them, but it’s more about preparing now and not worrying about that. Not getting too caught up in senior day,” Cannella said.

Cannella added that sometimes it can be difficult for players to readjust to the game after the pregame senior day ceremonies.

“Their parents are going to be there, it’s a nice thing, but you got to be able to hug and kiss mom and dad and then buckle down and play the game,” Cannella said. “Some guys get caught up in their last game, you just hope they go out there and play the best they can.”

UMass will also honor the 2006 Minutemen at halftime in recognition of the team’s 10-year anniversary of its appearance in the NCAA championship game, a 15-7 loss to Virginia.

Saturday’s opening faceoff is scheduled for 1 p.m. at Garber Field.