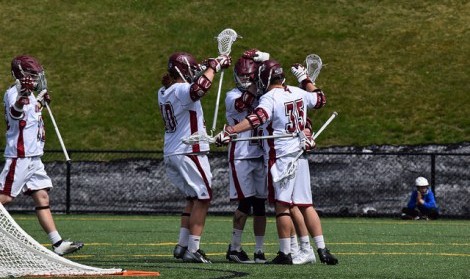 For any member of a Massachusetts men’s lacrosse team, past or present, there is nothing more sacred than getting the chance to play on Garber Field.

For seniors especially, the expectation is that your last game at Garber results in a victory.

That wasn’t the case Saturday afternoon for Bob Fahey, Kurt Hunziker, Kyle Karaska and Kevin Porzelt playing in their final game at Garber, as UMass (4-8, 0-4 Colonial Athletic Association) fell in its home finale to Hofstra 10-9 in overtime on Senior Day.

Despite getting a chance to come away with the win, the Minutemen fell just short, allowing the game-winning goal with 14 seconds left in the extra frame to give the Pride (9-4, 3-1 CAA) the victory, eliminating UMass from postseason contention.

Karaska, who has been an essential part of the Minuteman defense during his time in Amherst, doesn’t think he’ll be forgetting about this one any time soon.

“I don’t think you’ll ever shake off something like that, that’s our last game on that field as seniors,” Karaska said after the game. “Us four will probably take that for the rest of our lives, it won’t go away.”

After starting their careers at UMass with 11 other freshmen, Karaska, Fahey, Hunziker and Porzelt were the last four standing, and were honored before the game for their commitment to the program over the past four years.

Sophomore Buddy Carr, who scored the game-tying goal with 23 seconds left in the game, was quick to acknowledge the seniors and what they have meant to this program.

“I’m almost a junior now, and I can’t even believe that. To think about my last game on Garber is just crazy to think that’s gonna happen one day,” Carr said.

“I can’t say enough to the seniors on what they’ve done for this group and how they pushed us through this year. It just sucks to see them go, especially on a loss like that on Garber.”

Assuming he starts in next week’s season finale at Drexel, Karaska will finish with 54 career starts, a feat that hadn’t been accomplished since attackman Art Kell did it from 2009-12. The last close defenseman to accumulate over 50 starts was Jack Reid, who played from 2003-06.

When asked what he’d miss most of playing at Garber Field, Karaska gave a simple answer: Everything.

“That’s the one thing I’ll look back on and remember, just that field,” Karaska said. “That’s our field, that’s where I’ve spent the majority of my life for the past four years. I’ve spent more time on that field probably than with my parents and siblings and my closest friends are the guys that are out there every day with me.”

While his time with the Minutemen is coming to a close, Karaska acknowledged what the future hold for this team and the advice he would give to the younger guys on the team.

“The thing I’d say is just learn from what we’ve done this year. I know juniors have seen in the past that we made some pretty big changes this year, and I think they’ve worked in some way, and others haven’t worked that well,” Karaska said.

He added: “I think there’s a lot of unknowns that I think if we change things up and stick to our core goals and values, and maybe mix up some little things, we’ll find that secret to get us through to the end.”

At halftime of Saturday’s contest, the 2006 UMass team was honored for its run to the NCAA national championship game, before losing to Virginia 15-7. Among those in attendance were Reid, a two-time all-American, and Brett Garber, the grandson of Richard “Dick” Garber. Doc Schneider, currently an assistant coach with the Minutemen, was a freshman and played in cage for UMass during this run.

The highlight for the Minutemen was when they beat Hofstra 11-10 in overtime in the quarterfinals of the tournament after a miracle comeback in which UMass overcame a five-goal deficit with just 8:03 left in the game.