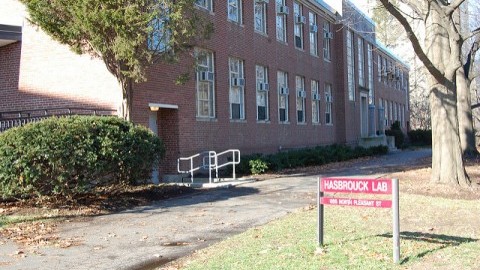 A group of more than 40 students and faculty packed Hasbrouck Laboratory room 113 at 4:30 p.m. Tuesday for a talk led by Nilanjana Dasgupta, a University of Massachusetts professor of psychological and brain sciences.

Titled “STEMing the Tide,” Dasgupta’s talk explored how female experts and peers serve as role models that encourage young women and increase their participation in science, technology, engineering and mathematics (STEM) fields, and focused on findings from her own research.

Dasgupta began her presentation by referencing a 2008 article from the Boston Globe titled “The freedom to say ‘no,’” which argues that the gender gap is largely a result of women’s preferences toward certain fields of study.

“The problem is that the assumption underlying this article is that (women’s) decision (not to participate in STEM careers) is free from societal influences,” she said.

However, Dasgupta argued throughout her talk that “people tend to move away from achievement domains that feel uncomfortable because they deviate too much from positive stereotypes of their own group,” adding that this premise applies to a lot of groups such as immigrants, first-generation college students and students of color, as well as women.

Through her research, Dasgupta has found that exposure to female professors or females actively working in the STEM fields leads to female students having greater confidence, finding STEM subjects more valuable and experiencing greater levels of personal identification with these subjects.

In a longitudinal study, Dasgupta and her colleagues followed 15 entry-level calculus classes from the beginning to the end of the semester, with seven classes taught by a female professor.

Using a computer program that allowed the subjects to quickly classify words as good or bad, Dasgupta measured the students’ attitudes towards math versus the humanities.

Yet, Dasgupta continued, women consistently outscored men regardless of their professor’s gender, which she determined by pulling data of the students’ final grades in the class.

“Clearly the ability is not the issue,” she concluded. “Confidence is the issue.”

In another study, Dasgupta examined how media exposure to females in STEM careers influenced female students’ attitudes. She randomly assigned the subjects to read for an hour each about female engineers, male engineers or studies without any mention of the researchers’ gender.

“Those who had been randomly assigned to read about female engineers looked more positively at engineering,” she said. However, she observed that reading about studies and reading about male engineers resulted in similar ratings, theorizing that the two are implicitly the same because those reading about an engineer of unspecified gender are inclined to assume the person is male.

The third study Dasgupta referenced during her talk analyzed how having a male or female mentor, or no mentor at all, affected a first-year female student’s success and comfort in the engineering major.

“In terms of what the mentors did, interestingly, we found no difference,” she said, adding that the frequency and quality of meetings, and how connected the students felt to their mentors, were the same. “There’s something about having a female mentor that has a protective effect.”

To examine how women worked together in groups, Dasgupta organized groups of four with a varying number of women.

“When we look at the impact of the gender makeup of the team … the (first-year) women who were the only woman on the team felt significantly more anxiety,” she said. The women who were in the minority on their teams were also less likely to speak up in class, which Dasgupta theorizes stems from a feeling of being outnumbered.

Michele Markstein, an assistant professor of biology who brought nine students to the lecture, said that she speaks with students frequently about the gender disparity in STEM fields.

“I actually think that what (Dasgupta) talks about should be required in the curriculum for both students and faculty,” she said.

Markstein said that in order to have the best students, all underrepresented groups need to feel included.

“Among those people are the very best,” she said. “We need to make an inclusive environment to maintain the very best.”