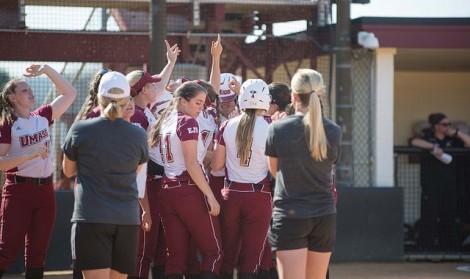 The Massachusetts softball team entered Sunday’s contest against George Washington one win away from several achievements.

With a victory, the Minutewomen (19-21, 11-5 Atlantic 10). would earn their first series sweep of the season, their winning streak longest streak (six games) and UMass coach Kristi Stefanoni’s 50th career win.

The Minutewomen achieved all three after defeating George Washington 4-2 in the final game of their weekend series in Washington, D.C.

UMass once again relied on the hot bat of Tara Klee, who went 2-for-3 with a two-run home run and a single. Klee’s homer was her sixth of the year, taking Colonials (21-23, 8-9 A-10) pitcher Sarah Costlow deep in the third inning.

“I just come up to the plate with confidence to complete my goals,” Klee said. “You don’t expect the home runs to come, but when they do happen it just feels that much better.”

Klee not only hit .444, but finished with two home runs along with four RBIs and a pair of runs scored over the weekend.

“There’s really no trick,” Klee said. “I guess I’m just focusing on being ready to attack.”

The biggest milestone, however, was Stefanoni’s 50th win.

“It means a lot, I didn’t think anyone would count my wins,” Stefanoni said. “I couldn’t have done it without the support of my staff or these kids. It’s not 50 wins for me, it’s 50 wins for UMass.”

Game two was an offensive show for UMass, as it rolled over the Colonials in a dominating 9-1 victory in five innings.

The Minutewomen hit four home runs in the victory, two off the scorching hot bat of Jena Cozza for her seventh and eighth of the season.

The other two came off the bats of Klee, her fifth of the season, and senior Olivia Godin, the first of her career with UMass.

Taylor Carbone  got the start for the Minutewomen and would get the win, allowing one run and striking out two in 4 and a third innings.

“I just tell myself as I’m walking back to the circle to keep it simple,” Carbone said. “I just try to get ground balls or pop flies because I trust my defense will take care of it.”

“Game two was probably our best game,” she said. “We had more hits and played better defensively.”

UMass squeaks out victory in game one

Despite being out-hit 5-4, the Minutewomen scrapped together just enough to escape with a 2-0 victory in game one.

GW never posed much of a threat in the game as the most hits it got in an inning was two, with UMass starter Megan Colleran earning the win.

“It’s great to be able to use (Taylor and Megan) in tandem, they’re a great pairing,” Stefanoni said. “It’s helpful, especially against GW, they play off each other and make sure the other is doing better the next inning.”

After a mid-week game against Boston University was cancelled, the Minutewomen will be back in action this Friday, when they take on La Salle in Philadelphia.