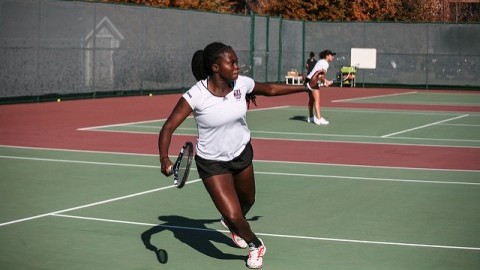 Following a 4-3 loss to George Washington Friday, the Massachusetts tennis team saw its season come to an abrupt conclusion following a strong showing in the second half of its schedule.

The Minutewomen finished the regular season on a nine-game winning streak that dated back to February, earning them the second seed in the Atlantic 10 tournament. Despite this they were defeated in the first round in one of the closest matches they competed in all year.

“We’re bitterly disappointed,” coach Judy Dixon said. “That’s for sure. I think that this was very unexpected. We were one point away from beating George Washington 4-1. We had multiple match points so if we convert we win 4-1 and we get off the court, but we didn’t so there we are.”

UMass experienced tough defeats across the board. Ruth Crawford, Ana Yrazusta, and Anna Woosley all lost three-set matches where the Colonials earned points in singles. Crawford and Woosley lost the deciding sets of their matches by two points or less.

“We learn from this,” Dixon said “I think they took a little bit for granted that they were going to be successful. I think they sort of thought ‘yeah, we got this’ as opposed to ‘we have to work for this.’”

Dixon said the unexpected result following the highly successful end to the regular season offers an opportunity for the program to improve, and Dixon said there may be some changes in their approach coming this offseason.

Although the nine-game streak that they accomplished is still a point of pride for them, Dixon believes the Minutewomen may have been better off versus competition that would have challenged the team a bit more heading into the postseason.

Despite the season ending in defeat, the Minutewomen still finished 14-7 with an undefeated record at home this spring. So the overall the season is not one that Dixon looks at negatively.

“I’m always proud of it when I look at the overall record for the year I would have to say that we had a good year … that win-loss record is important and of course we are proud of it,” Dixon said.

For Dixon, the turnaround into next season is a quick one.

“I take a couple of days to complain and be sad and all that kind of stuff, then I get back to work.” Dixon said. “I start recruiting and that’s my main focus, to get on the road and recruit.”

Given the United States Tennis Association New England Hall of Famer just completed her 24th season at the helm in Amherst, speculation once again swirled at the season’s conclusion over whether she would be running the program moving forward.

At least for the upcoming season, Dixon says she’ll be here coaching in Amherst.