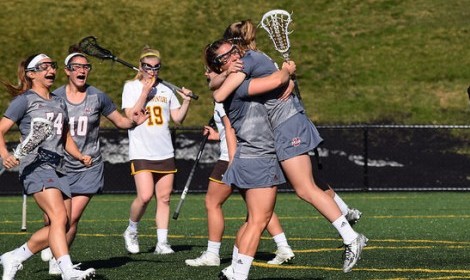 With one game left to spare, the Massachusetts women’s lacrosse team clinched the top seed in the Atlantic 10 tournament following its 18-3 win over Virginia Commonwealth Sunday.

No. 19 UMass (15-1, 8-0 A-10) fed off of a record-setting performance by midfielder Hannah Murphy and her nine draw controls, which brings her season total to 118, breaking her own single-season record of 113 for the program last year.

“She’s a perfect example of hard work paying off,” Minutewomen coach Angela McMahon said. “Hannah is one on the hardest working players on this team. She is always putting in extra hours outside of practice trying to be the best draw taker she can.”

The Minutewomen put that dominance on display in the second half, holding VCU to just two shots and zero goals for 30 minutes.

“Overall we did a great job maintaining possession and executing our offense,” McMahon said. “Because our offense played so well we really didn’t have to spend a whole lot of time on defense, especially in the second half.”

Senior attacker Eileen McDonald opened the scoring in the second half with her 28th goal of the season just 20 seconds in, bringing the score to 12-3. The Minutewomen would go on to score seven unanswered goals in the half.

Sophomore Ashley Faulhaber would cap off the impressive stretch for UMass with five minutes, 41 seconds to go on her 10th goal of the season, putting the finishing touches on a clinical performance by the Minutewomen.

With leading scorer Nicole Troost still sidelined with an injury, the rest of the UMass offense stepped up and showed the real reason why the Minutewomen are ranked among the top five offenses in the nation.

Eight different players combined for UMass’ 18 goals, with five of them scoring multiple times in an incredible display of depth and versatility.

“Today has been what we’ve been working towards all season,” McMahon said. “A lot of different scoring threats and letting our players know that if they have an open shot at the cage, they should take it.”

Santos opened with the game’s first goal on an assist from Holly Turner 1:58 after the opening whistle.

Five players got involved with the scoring early as the Minutewomen started off with nine of the game’s first 10 goals, leading 9-1 with just under 11 minutes left to go in the first half.

VCU’s last goal would come with just one minute, 15 seconds remaining in the first half to bring the score to 11-3 before both teams went to the locker room.

With the number one seed in the A-10 tournament locked up, not much more can be gained from the Minutewomen keeping their record win streak against the conference alive. However, McMahon is still looking forward to Senior Day on Saturday against Davidson.

“We really like to take it game-by-game,” McMahon said. “I’m still really excited about next week’s game honoring our seniors, and closing out our season at home.”

Saturday’s opening draw has been moved up to 11 a.m. following the pregame ceremonies for the Minutewomen seniors.