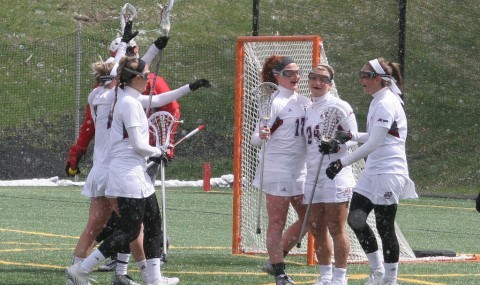 The Massachusetts women’s lacrosse team was just one win shy of the NCAA record for consecutive conference wins, with a victory over George Mason putting the Minutewomen in control of the Atlantic 10. So, naturally, it turned out to be one of the toughest games for them this season.

UMass (10-1, 3-0 Atlantic 10) topped the Patriots (7-3, 2-1) 13-9, but not before contending with a couple of rough patches along the way. The Minutewomen did not hold a lead until there was three minutes, 16 seconds remaining in the first half.

“I give George Mason credit, they had a great game plan for us on defense, and we had a few unforced errors on our part that we could have done better,” UMass coach Angela McMahon said.

George Mason opened the scoring 3:56 into the game with a goal by attacker Chachi Kelehan, her 21st of the season and the first of four on the day. The Patriots would go on to take a quick 2-0 just two minutes later.

The Minutewomen responded with quick back-to-back goals less than a minute apart from each other to even the score at two, with Eileen McDonald scoring first for UMass with 24:01 left in the first half.

“We came out a little bit shaky and slow on offense, it took us a little time to get our feet under us, but I thought they responded well,” McMahon said. “We had a couple of careless moments, some one-on-one opportunities with the goalie on offense that really should be guaranteed goals every time”.

Kelehan would go one to score her second of three goals in the first half to put the Patriots back on top 3-2.

Offensively, Erika Eipp showed her skill as an all-around playmaker particularly in the first half with three assists and one goal helping account for half of the Minutewomen’s points in the half. She would finish with six points (four assists, two goals).

The Minutewomen then went on a 4-0 run to close out the first half with an 8-4 lead.

In the second half George Mason proved they would not go down easy with opening scoring at 26:01 with a goal by Hannah Warpinski to cut the deficit to 8-5.

The second half would continue on as a back-and-forth game in terms of scoring, with each short run by one team being answered by the other.

While draw controls went massively in favor of UMass with 19 compared to just five for the Patriots, largely lead by midfielder Hannah Murphy with eight, the Minutewomen struggled to control the game for any extended period of time.

“Hannah Murphy was huge on the draw for us, and we really needed that. It helped us stabilize and get on track offensively,” McMahon said.

The Minutewomen closed the game with back-to-back goals by Murphy and Abby Walker to clinch a 13-9 victory, earning them the record and sole possession of first place in the A-10.

UMass will continue its road trip Sunday at noon when it faces George Washington.