UMass women’s track and field edges out Northeastern, while men take second in home debut in Leap Year Tri-Meet against Vermont and Northeastern 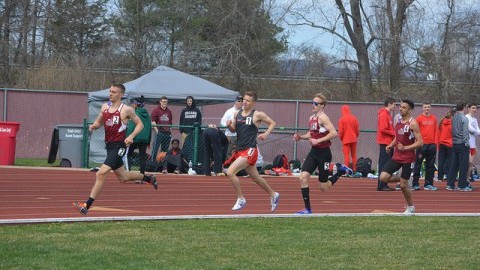 The meet drew in a crowd of alumni that ranged from as far back as 1976 to just a few years ago.

“I felt as though there was a good amount of enthusiasm and our athletes really fed off the hometown crowd which was nice to see,” UMass men’s coach Ken O’Brien said.

The Minutemen, who were without a few top performers that competed the day before at Princeton, finished with 118 points and a second place finish out of three teams with Northeastern posting 160 points and Vermont only 93.

“Northeastern is a highly regarded program in New England and I would have been surprised if we had managed to beat them,” O’Brien said. “Our fight today was with Vermont, who have made tremendous strides in recent years.”

UMass showed a level of versatility by scoring in multiple events across the board, but showed a particular measure of strength in the field events.

Among the first place finishers was junior Deion Arneaud in the triple jump with a distance of 46 feet, eight inches which matches his personal best set back in the Atlantic 10 championship of last spring.

“I feel pretty great about where I am now and I hope I can keep being consistent,” Arneaud said.

However, the junior did not hit this mark without struggling a bit on his first few attempts with a string of fouls. Coming off the 4×100 relay may have thrown his stride off a bit.

“It’s really a different type of running on the track versus on the runway. The first jump I ran but started to stride out at the end, so I moved back,” Arneaud said. “It’s tough when you foul because you want to move back, but when you do you start driving out more which make you keep fouling by the same amount, so you just have to keep your run consistent and trust your mark.”

Other standouts included sophomore Evan Burton in the discus throw taking second with a throw of 142 feet, one inch. Fellow sophomore John Chuma took first in the pole vault with a height of 15 feet, 11 inches, setting a new school record.

On the track, Zach Grube’s performance in the 400 meter hurdles led the Minutemen with a time of 56.24 seconds, earning him second. Freshman teammate Zach Frahlich also earned a third place finish in the 1500 meter run with a time of 4:02.14.

Minutewomen beat Northeastern by one point

The women’s track and field team scored a total of 137 points, which was just good enough to beat the Huskies’ 136. Vermont rounded out the scoring with 107.

UMass also relied on its ability to score across multiple events and did so without junior stand-out Heather MacLean, who was out with patellar tendonitis.

Helping fill the void was freshman Emilie Cowan who took first place in the 800 meter run with a time of 2:12.75, which nearly tied her personal best set during the indoor season.

Cowan and freshman teammate Mary Lavery stayed together throughout the majority of the race, and were separated by one second at the finish line with Lavery taking second at 2:13.

“The goal for me was to just go out, I didn’t really do that last week at Florida,” Cowan said. “I know Mary (Lavery) in distance races is very strong, especially in the first half of the race, and I just wanted to stay with her as long as I could.”

The sprinting events were capped off for the Minutewomen by sophomore Diamante Spencer with a time of 12.4 seconds in the 100 meter dash winning her first place.