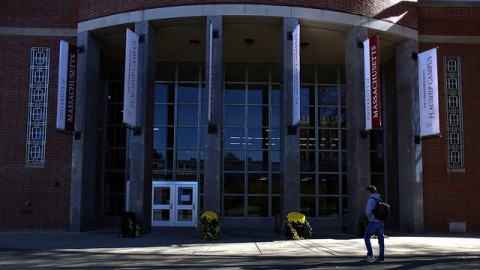 The University Union is hosting a debate Tuesday at 7 p.m. on Affirmative Action, a strongly debated topic that is expected to have another ruling in its history delivered by the Supreme Court this June. The debate, the third hosted by the union this year, will be held in the Student Union Ballroom at the University of Massachusetts.

Michael Maldari, a junior operations and information management major and vice president of the Union, said “we definitely wanted to do something controversial. I think it’s timely because the Supreme Court is about to make a ruling on it so I think that it was the perfect time really to educate people about it.”

The Supreme Court heard arguments for the case of Fisher v. Texas in December, in which a white student argues she was not admitted to the University of Texas on the basis of her race. Texas claims she had neither the grades nor test scores to be admitted, regardless of her race. The Court is expected to announce its decision in June.

The Union has invited two academics to come and debate the policy. Randall Kennedy, the endowed Michael R. Klein professor of law at Harvard Law School is one of them. His most recent book is titled “For Discrimination: Race, Affirmative Action, and the Law.”

Peter Wood, president of the National Association of Scholars, will debate Kennedy.

Maldari says that in choosing debaters, the Union looks for experts who are actively speaking out on the issue and publishing books and articles.

While finding experts to come speak isn’t easy, Maldari says that overall the response from speakers has been positive, even from those who aren’t able to make it.

Maldari said he told Kennedy and Wood to be “prepared for everything” in terms of questions they might be asked from moderators.

The Union is expecting an increase from the 200-person crowd that attended the RSO’s debate “Opposing Views on American Politics” held on April 9.

“We just want to get a lot of people out here motivated to learn, that’s going to be great for the community,” Maldari said.

When asked about the controversy surrounding the topic, Maldari responded “I think controversial topics are important to discuss and I mean a college campus is a place where, if anywhere, you can discuss those topics especially when you have two very high caliber academics onstage presenting the information – I think that’s the perfect setting for that.”