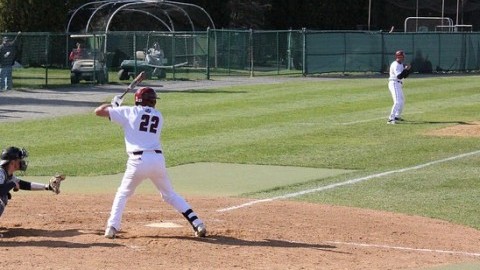 The last time the Massachusetts baseball team faced Harvard under the sunny skies of Clearwater, Florida in mid-March, the Minutemen lost both games of a two-game series.

Wednesday’s rematch in the Beanpot tournament consolation game took place much closer to home for the two Massachusetts-based teams at the New England Baseball Complex in Northborough, and the change of scenery produced a change in results as the Minutemen topped the Crimson 6-2.

UMass (9-17, 2-7 Atlantic 10) finally saw strong performances in all phases of the game during Wednesday’s non-conference win. On the mound, freshman Casey Aubin picked up his second win of the season, going 51/3 innings, giving up two runs and striking out five.

Minutemen coach Mike Stone was impressed with how Aubin battled throughout the game.

“(Aubin) struggled with his command at times today, but he battled through it and did a nice job out there,” Stone said. “He’s got a good arm and he’s got good movement on his fastball, so if he can get some of his command issues worked out he should be big going forward.”

UMass’ bullpen was also once again a strong point for the Minutemen for the second straight day. Coming off a game where the relievers pitched three combined innings, only giving up one hit in a 9-5 win over Connecticut, the bullpen had another big performance Wednesday against Harvard (12-20, 5-7 Ivy League).

“Today’s game turned into a bullpen battle and those guys got it done for us when we really needed them to come through, so we’re pretty happy with how they pitched.” Stone said

The Minutemen did more than enough offensively to put themselves into position to win. Leadoff hitter Brett Evangelista led the team with three hits and scored three runs in the process. Five other UMass players had multi-hit games, including John Jennings who hit his team-leading sixth home run.

Jennings continues to be the most consistent hitter in the Minutemen lineup and has produced well in the No. 4 spot. The Newton native bumped up his team-leading batting average to .337 and moved into first on the team in hits with 34 on the season.

Stone thought his offense was strong Wednesday, but he was looking for a little more out of his lineup in terms of capitalizing on opportunities

“Our offense is going to be real important going forward,” Stone said. “I think we should have scored more than six today. We had a lot of opportunities to extend the lead and we didn’t. But I think we’re playing better and improving at a key point in the season, which is always a good thing.”

In the other dugout, the Crimson did not see consistent success at the plate, but they did get a big game from designated hitter Patrick McColl, who went 4-for-5 on the day. Third baseman Matt Rothenberg added two hits and an RBI.

Both teams would have preferred to be playing in the Beanpot championship game instead of Boston College and Northeastern, but just being in the tournament is special, as Stone looked to take the positives from the recent play of his team.

“The fact that it is a tournament, you certainly want to finish as high as you can,” Stone said. “Two good games in a row have been big for us. It’s always good to get those midweek wins to propel you into the weekend, so we are happy with the results we’ve seen this week.”

UMass will be back in action this weekend as it begins a three-game series with conference foe La Salle. The first of the three-game set is Friday starting at 3 p.m. at Earl Lorden Field.